If you want to see a pretty part of Earth, step outside. If you want to see all the pretty parts of Earth, step into outer space. NASA recently released the first piece of celestial eye candy for the year, and it’s a whopper. Blue Marble 2012 is a gorgeous image of Earth taken from 512 miles above the surface using NASA’s Visible IR Imager Radiometer Suite (VIIRS) aboard the Suomi NPP satellite. The suspended sphere hanging in the night is a call back to the iconic image Blue Marble taken during the Apollo 17 mission to the moon 40 years earlier. Unlike the original, Blue Marble 2012 was created through a composition of multiple images taken during four orbits on the Suomi NPP. Scroll down to see the original 1972 Blue Marble followed by updated incarnations of the planetary portrait all the way to the latest picture just released. The crafted grace of these images is almost as impressive as the successive leaps in technology that enabled their creation. 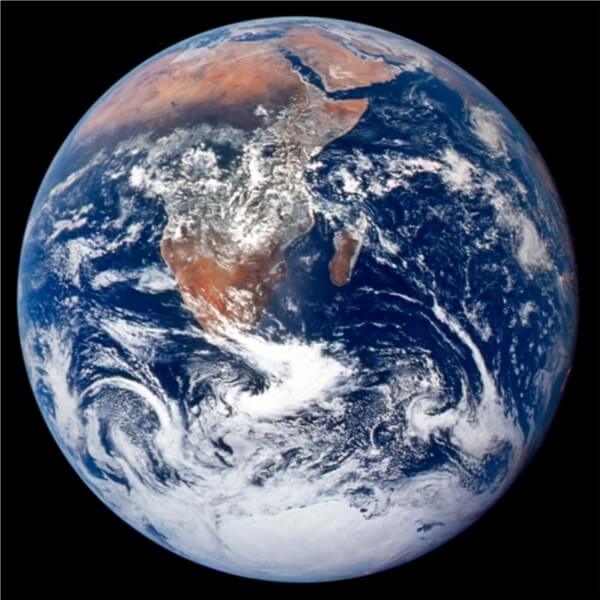 Taken on December 7, 1972 aboard the Apollo 17 during its mission to the moon, this photograph was the first of its kind to successfully capture the southern ice cap. Since NASA first released it, this image has become one of the most iconic, and recognizable pictures of the globe ever taken. 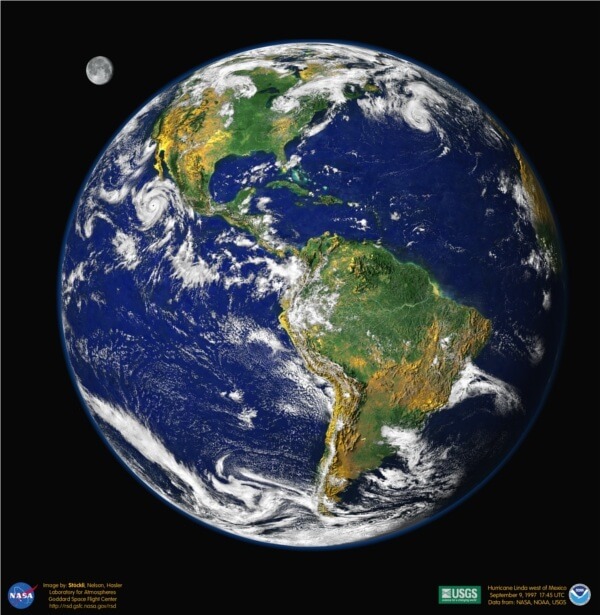 25 years after the original Blue Marble, NASA compiled the latest in satellite images to create this anniversary portrait. While the base image was taken on September 9, 1997, vegetation and oceanic coloring was created using data collected throughout the fall of that year. That coloring data was draped over topographical models created by the U.S. Geological Survey. The completed computer file for this portrait was 26 MB, making it one of the largest ever taken by NASA at that time (though that’s only equivalent to less than 10 photos shot with an iPhone 4S). The moon in the image is an artistic conceit, created from a 1994 photo swollen to twice its relative size.

Image Credit: Reto Stockli with the help of Alan Nelson, under the leadership of Fritz Hasler 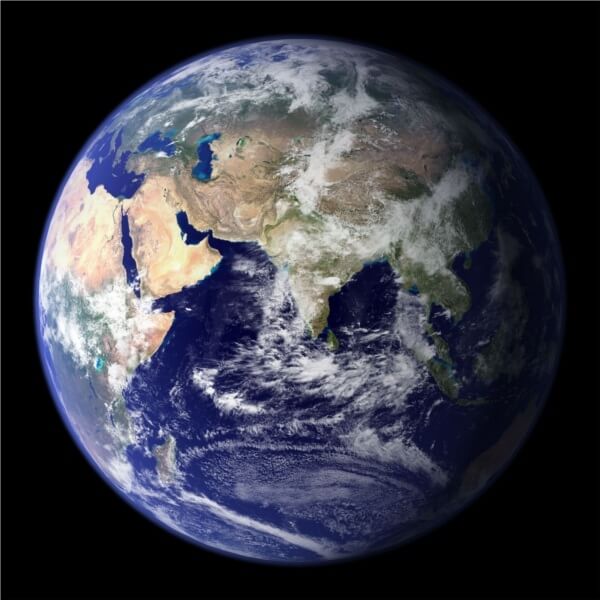 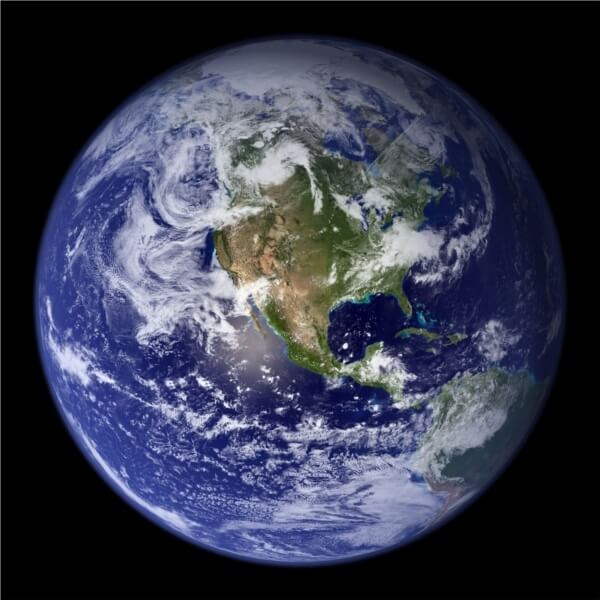 Collected from June to September of 2001, this image integrates various land, ocean, and atmospheric readings almost entirely gathered by MODIS. Photos were taken every eight days to avoid cloud images that may block the sensors. Visuals of city lights were gathered over nine months and superimposed. The entire globe was captured in this model with the true-color represented accurately for every square kilometer of the surface – allowing for both sides of the planet to be shown. At the time of release it was the most high definition, true-color, image of the Earth to date. 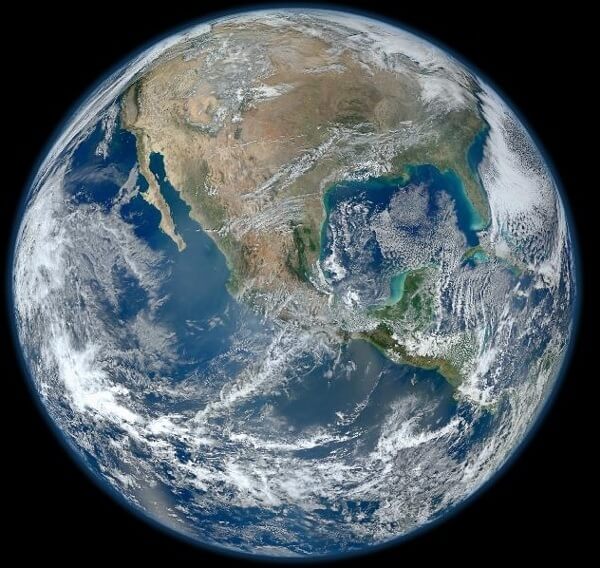 The newest Blue Marble was created from images collected by VIIRS during four orbits on the Suomi NPP satellite around January 4th, 2012. The National Polar-orbiting Operational Environmental Satellite System Preparatory Project (NPP) was recently renamed for Verner E. Suomi, considered by NASA to be the father of satellite meterology. With that name change comes a focus on improving understanding of Earth’s weather and improving forecasts to never before seen levels of accuracy. In a sun-synchronous orbit, Suomi NPP passes over each portion of the Earth at roughly the same local time, allowing each section photographed to be exposed to approximately the same light level. This latest Blue Marble once again represents the current pinnacle of NASA terrestrial imaging power.

The NPP Satellite was just launched in October 2011 and from its position 512 miles above the surface it continually collects images of the Earth in sections about 3 million meters across (~1900 miles). The following image, though not a member of the Blue Marble series, demonstrates how these large wedge photos can be overlain together to form a complete view of the planet. Well, almost complete, for this image the North Pole was not able to be photographed due to a lack of sunlight during the winter season. 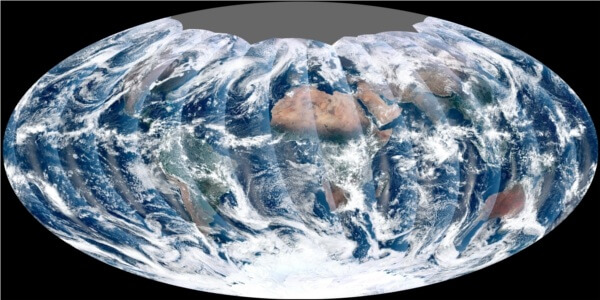 Blue Marble 2012 represents forty years of NASA sharing its celestial view with humanity. From well timed photographs on long-range manned missions, to artistically compiled images, to data driven models, to automated observations gathered by satellites, these portraits give us a unique perspective on Earth. Humanity’s commitment to science and exploration has provided a point of view we could have never achieved otherwise. It may feel like we’re simply stuck on a warm wet rock hurtling through space, but Blue Marble reminds us that we live on a wondrous, beautiful planet.