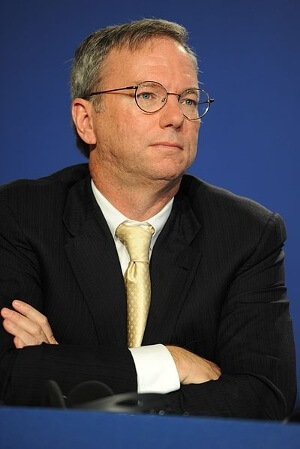 There are few people in the world with a resume like Eric Schmidt. Just finishing his decade long run as Google’s CEO, Schmidt is also a former Apple board member, former Stanford Business School Professor, and a pretty kickass programmer back in the day. In his time this billionaire has advised world leaders and shaped global perception of the internet. Now, Schmidt is leveraging his expertise in online search and communication to discuss one of the most important emergent technological developments of the 21st Century: Collective Intelligence. Formed as huge numbers of people share incredibly enormous amounts of data freely over the net, Collective Intelligence is seen popularly in Wikipedia, Linux, and Yahoo Answers. This past fall at the MIT Sloan School of Management, Schmidt presented his thoughts on how the focus on hardware and software will fade in importance to harnessing the globally generated network of knowledge and data. See all of Schmidt’s talk, “The Future of the Global Mind”, followed by an entertaining Q&A session in the video below.

Introduced by MIT’s Thomas Malone, one of the leading researchers in the field of Collective Intelligence, Schmidt explores a wide range of topics. By the time the presentation really gets going around 11 minutes in, he declares the global network of knowledge to be “as important, if not more important, as the development of electricity.” He also gives the audience a new motto: “in God we trust, but all others bring data”. Of course Schmidt brings Google into the conversation, pointing out how the search engine giant researches 200,000 experiments in their field each year, incorporates 500 new developments, and faces an ever changing web – 16% of searches each day are new. Google’s also becoming more open, revealing some of their recent changes in approach last fall. On a more personal note, Schmidt’s data-centric approach to global problem solving shapes not only his take on politics (leaders should follow facts, not opinions), but also his take on the future of humanity. Around 22:00 he delves into the merger of the physical and virtual worlds. Yet for all the change Schmidt foresees, and he predicts quite a bit, he clearly views the global sharing of information as a powerful tool for freedom against oppression: “the last gasp of an autocrat is to turn off the internet.”

Questions, starting around 33:30, discuss digital rights managements, renewable energy, global warming data, exponential growth in intelligence (41:20), pending government regulation, how to maintain physical intuition in a virtual reality dominated Earth, and the ways in which we can use data to motivate behavior.