A remote drug delivery system has successfully been tested in a human trial. A microchip was implanted in 8 women and delivered a drug to treat osteoporosis once a day for 20 days. There were no adverse affects and, compared to a control group of women who injected the drug, the microchip-delivered treatment was just as effective.

The miniature chip, 5 cm long and 3 cm wide, was implanted under local anesthesia in just 30 minutes. It contained 20 tiny reservoirs, each of which holds 600-nanoliters of drug solution, over which a thin layer of platinum or titanium contained the drug. Upon dosing, a current is applied which melted the metal coverings and allowed for drug release. The chip’s actions can be programmed for drug release at specific intervals or on demand with the use of wireless communication link. The bidirectional communication also tells researchers whether the chip is working properly or not.

The drug-delivering chip is the realized 15-year old vision of MIT researchers Michael Cima and Robert Langer, now collaborating with MicroCHIPS Inc. to produce the chips. They published the results of the study in the Feb. 16 online edition of Science Translational Medicine. 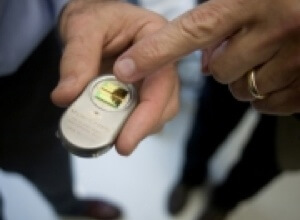 An automated drug delivery system is highly desired among health professionals, especially in cases where a drug must be administered frequently, as on a daily basis. Patient compliance – how closely a patient follows his or her prescribed drug regimen – is a major problem. The teriparatide that is used to treat osteoporosis patients stimulates bone formation, but it must be taken daily. That typically entails sticking oneself with a needle on a daily basis. According to MicroCHIPS president Robert Farra only about one in four osteoporosis patients actually stick to their daily dose. Because the chip can be programmed to release doses regularly, patient compliance becomes a non-issue – not to mention they avoid the unsavory daily needle stick.

One concern for the researchers was the possibility that the body’s defenses would cause the implants to be enveloped in a protective, fibrous tissue, and prevent the drug from being released. This turned out to not be a problem as the drug was able to diffuse through the surrounding layer and enter the bloodstream. Before the chip can be widely used, however, researchers will need to demonstrate that it is durable and reliable, John Watson, bioengineer and found of the William J. von Liebig Center for Entrepreneurism and Technology Advancement at the University of California, said in an editorial about the study. Having the chip unexpectedly dump its entire drug load is a possibility they’d like to rule out as much as possible, as well as failure to release to patients whose life depends on the drug. In the last study one of the devices in fact did fail and was excluded from the data.

Confirming its effectiveness and safety would open the door for using the chip to treat other diseases. Other patients who require regular drug treatments, such as those with chronic pain or diabetes, could have their lives made much easier. The chip would become really handy for diabetics if it had the capability, like the Artificial Pancreas, to both measure blood glucose levels then automatically release the appropriate amount of insulin. And because it has an array of reservoirs, several types of drugs could be placed on the chip to meet all the patient’s pharmaceutical needs. An entire pharmacy under your skin.

Right now the wireless communication has a very limited range of only a few meters. But in the future we could see that range extended. Imagine, your doctor could one day read your blood chemistry and give you a “shot” from his office. That day’s probably a long way off, but as the company hopes to be in regulation testing by 2014, the day people like osteoporosis patients won’t have to deal with the pain of remembering and suffering injections may not be too far away.

Fiber Optics Could Be the Key to Million-Qubit Quantum Computers

Nanophotonics Could Be the ‘Dark Horse’ of the Quantum Computing Race, New Paper Says