Robots Will Do Everything You Do Now Only Better—What Then? 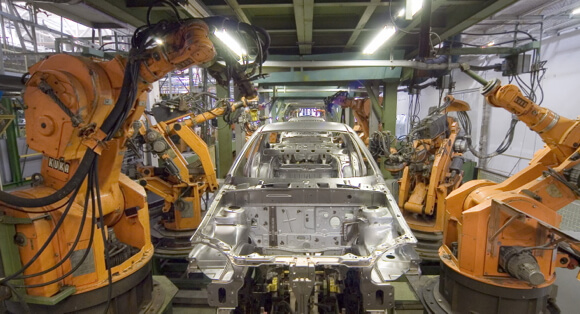 The S&P 500 is at record highs, having finally regained all it lost in the 2008 financial crisis. It would be cause for celebration if it didn’t feel so out of touch with the “main street” reality of continued high unemployment. As a recent New York Times headline read, “recovery in the US is lifting profits, but not adding jobs.”

The NYT goes on to blame the divide between rising corporate profits, recovering stocks, and stubborn unemployment on big gains in productivity over the last few years. The article notes that the giant industrial conglomerate, United Technologies, “does not need as many workers as it once did to churn out higher sales and profits.”

While United Technologies (and other manufacturing firms) may not be adding jobs, it’s strange to blame today’s high rate of unemployment on the trend. Due in large part to automation, manufacturing jobs have been disappearing for over 30 years. During that period, unemployment has been as high as 10.8% and as low as 3.8%. A better headline might read, “recovery in the US is lifting profits, but not adding traditional jobs in manufacturing and that’s nothing new.”

The time and creativity that productivity growth frees—and it’s been happening since the Industrial Revolution—is responsible for every modern invention from healthcare to high tech, smartphones to non-invasive surgery. If humans hadn’t started using machines to do some things for us, most would still be working in the fields with few moments to spare pondering economic theory, let alone inventing new technologies.

One argument says that this time is different because soon robots will be able to do everything a human does. But it’s misguided to assume we can forecast what humans “will do.” What that statement really means is, “In the future, robots will do everything humans do today.” But what exactly it is that humans will do in the future is anyone’s guess—and few, if any, have ever successfully predicted it.

Before the 20th century, most folks in the West farmed. Now, thanks to massive productivity gains in agriculture, virtually none do. To a 19th century farmer that would imply nothing less than the collapse of the economy. Why? Because the thing most people did back then was farm. Our farmer might understandably wonder, “What will we do when machines perform our jobs for us? How will we make money? How will we survive?”

We are gifted with the vision of our times and cursed with the temptation to extrapolate that vision into the future. How could our farmer know that in 2013 humans would be paid to make movies, pick up garbage, write online, build robots, clean bathrooms, engineer rockets, lead guided tours, drive trucks, play in garage bands, brew artisanal beer, or write code?

The revolution in agricultural technology liberated vast resources and made us all richer and the economy more diverse as a result. And while one might think that those riches should have accrued to only those making agricultural tech, thus permanently widening the income gap, no such thing happened in practice. While those making agricultural machinery undoubtedly made some bucks, the next economic waves provided different work and income for many levels of skill and motivation.

This is understandably a firebrand topic right now. If current unemployment marked the beginning of mass technological unemployment, you can be sure mass social unrest would be quick to follow. But we can’t prove it’s structural yet. Unemployment is a typically lagging indicator. (Click ‘show recessions’ here to see how unemployment continues long after recessions end.) In the last sizable downturn in the early 80s, unemployment didn’t drop below 7% for four years after the recession ended. And that preceded two decades of virtually unbroken growth.

We don’t know precisely what the future holds, but we do know that most in the developed world—even the poorest—live longer, healthier lives than they did a century ago. And while the world will never be a perfect place, technology and productivity have freed more minds to ponder, play, and invent today than ever before.