Wearable Device GIST Helps the Blind ‘See’ What’s Around Them 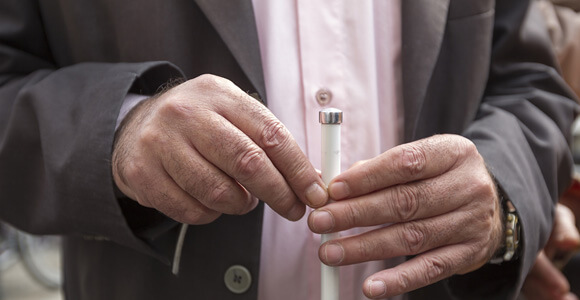 Wearable computers have generated a lot of excitement and buzz based almost exclusively on their novelty. Sure it’s easier to wear a video camera on your face than to hold it up, but shouldn’t wearable devices perform useful functions that smartphones can’t?

Meet GIST, a gesture-controlled wearable device that helps the visually impaired navigate the world around them. University of Nevada computer scientists Vinitha Khambadkar and Eelke Folmer recently debuted GIST at a technology conference.

The user wears GIST, or Gestural Interface for Remote Spatial Perception, around his or her neck. Using different gesture commands, the user can prompt the device to provide information on whether there’s a person nearby, the predominant color of an object or its distance from the user. The device can also measure the depth of a particular area, indicated with the hand.

Users need to have some sight to interact with GIST. But few people are completely blind; most can perceive at least vague shapes and light sources.

Based on Microsoft’s Kinect sensor, the device detects the hand signal and reads the pixels surrounding the user’s outstretched hand to provide an answer. It answers the queries out loud.

GIST turns “the user’s hands into versatile sensing rods,” the authors wrote in the paper introducing the device. In other words, it allows visually impaired users to do nearly everything they could with a white cane while leaving their hands free for other things.

In a video, Khambadkar and Folmer demonstrate a few use cases. In one, a woman uses the “color” command to locate a water bottle. She then uses the object distance command to find it with her hand and pick it up.

GIST has been tested on eight blind users. With additional testing, Khambadkar and Folmer plan to incorporate object and facial recognition so the user can ask the device to scan for a particular object or to tell them who is in front of them.