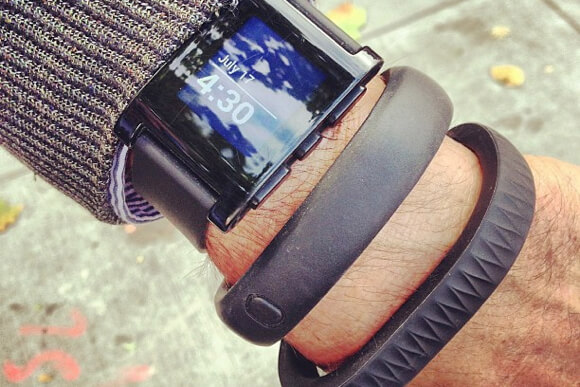 It’s easy to be a skeptic in Silicon Valley. The probability a hot startup will be passé within a year or two is much higher than the probability it’ll be the next Apple, Facebook, or Google. An obvious fact that, confronted by PR-fueled propaganda and passionate founders, can be hard to remember.

On the other hand, it’s also easy to get carried away by skepticism. A thousand startups trying to nail a particular idea may fail. That doesn’t necessarily mean the idea is misguided; it just hasn’t been fully articulated yet. Even when the technology is ready, articulation takes experimentation, and experimentation takes time and failure.

This, it seems, is the way of smartwatches—they have potential and even some momentum, but no one’s marshaled all the disparate capabilities into one gorgeous, irresistible product or service.

Most people, for example, don’t need a $200+ second smartphone display and notification center on their wrist. This doesn’t invalidate wearables in general, or even wrist-borne wearables specifically. Smartwatches just don’t fully exploit their main attraction—namely, that they’re in continuous contact with the body.

But that’s changing as new “quantified health” devices are adding unique data that only miniature sensors and chips in contact with the body can gather—information like blood pressure, blood glucose, blood oxygen, and respiration.

Technically, a wristband is also a smartphone-connected external device, but as opposed to sporadic readings requiring action from the user, wrist-borne devices can offer continuous, in-depth health data, whether the user is paying attention or not.

The Quanttus device, still in early development, is a faceless watch-like contraption on a black, rubber band. It shines a light through the wrist’s skin and, by measuring changes in light absorption and the subtle pulse-related movements detected by its accelerometer, deduces heart rate, blood pressure, and respiration.

The startup is testing the technology at two Boston hospitals, where they are comparing the device’s measurements to traditional clinical tools. Quanttus co-founder and CEO, Shahid Azim, recently characterized the results as “very promising.” (Accuracy will be key—fitness trackers, for example, are not particularly consistent.)

The company hopes to have a beta version to developers later this year. Applications will, at the least, need to organize and present the data, provide key health insights, suggest health improvements, and even challenge folks to take action.

Lacking a name, price, and release date, it’s too early to to jump on the Quanttus bandwagon, but we think their ambitions highlight a more general point—wearable tech that consolidates a range of health data into a single device is an attractive proposition.

And the more consolidation, the better.

The Scanadu Scout, for example, isn’t wearable but, when pressed against the forehead for 10 seconds, it takes a broader range of measurements—temperature, respiration, blood oxygen, heart rate, and blood pressure.

Scanadu also plans to make a smartphone-compatible device for urine analysis. Called Scanaflo, the device would provide an wide array of health data including levels of glucose, protein, leukocytes, nitrates, blood, bilirubin, urobilinogen, specific gravity, and pH—it will even test for pregnancy.

The dream is to consolidate as many measurements as possible in a wearable like the Quanttus band—or something even subtler, like a few ultra-thin, transparent patches on the skin and clothes. As Jason Silva said in a recent conversation, “The best technology is the technology that gets out of the way and lets you do what you want to do.”

We don’t want to attach our blood pressure cuffs to our smartphones. We want forgettable, invisible devices working in the background. We don’t want an unending array of separate tests. We just want one. We don’t want to interpret charts and graphs. We want to have a conversation with a professional.

Digital physicians proactively monitoring data from body sensors, contacting you when there’s a problem (maybe even before physical symptoms), advising a course of action, answering questions, noting the results—doing all this continuously, tirelessly, and in perpetuity.