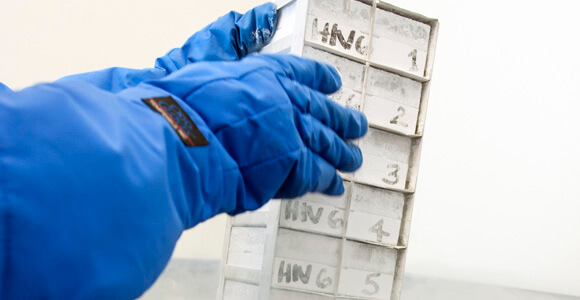 Carl June and his colleagues at the University of Pennsylvania have been making waves since they published some successes fighting leukemia with a revolutionary new method. They removed patients’ T cells and genetically modified them to target and kill the cancer. When the T cells were reintroduced into the patients’ bloodstreams, their cancer was often sent into complete remission.

Could similar modifications to the immune system’s fighter pilots provide revolutionary cures for other cancers and even other diseases?

The U. Penn researchers are applying a similar technique to that other hardest-to-treat disease, HIV/AIDS. They recently completed a Phase 1 clinical trial in which they removed HIV-positive patients’ T cells and genetically modified a portion of them to include a rare HIV-resistant genetic mutation of the CCR5 gene (called delta 32).

The trial purports to be the first genetic therapy for HIV/AIDS tested on patients.

As the HIV virus replicates in the body, it kills off T cells using the CCR5 protein on the cell as a foothold. In people who have a single copy of the mutated gene, the infection progresses more slowly; those who have the mutated gene on both chromosomes are seldom infected even when exposed.

Although the trial was designed only to prove the safety of the approach, the results hint that the treatment may work. The twelve patients in the trial, who had the mutation introduced in a portion of their T cells, saw their viral loads fall. One patient’s even became undetectable. Among the six patients who stopped taking their antiviral medications a month after the treatment, the modified T cells declined more slowly than the unaltered immune cells.

“This study shows that we can safely and effectively engineer an HIV patient’s own T cells to mimic a naturally occurring resistance to the virus, infuse those engineered cells, have them persist in the body, and potentially keep viral loads at bay without the use of drugs,” June said in a news release.

It was the failure of another initially promising treatment in two patients known as “the Boston patients” that lead June and his colleagues to CCR5. After Timothy Ray Brown, also widely referred to as “the Berlin patient” cleared his HIV infection after a bone marrow transplant to treat his leukemia in which the donor who was among the 1 percent of the population with the HIV-resistant CCR5 mutation.

Two HIV-positive patients in Boston were also later given bone marrow transplants to treat blood cancers. Their donors, unlike Brown’s, did not have the genetic mutation. The patients initially seemed to clear the virus, but it returned. Researchers concluded that the virus had lurked in a reservoir where conventional testing doesn’t look, raising concerns about whether the only other cases of “functional cures” — in which infant patients were given prompt and powerful doses of anti-retroviral drugs — will be long lasting.

“The Boston cases show us that for the Berlin patient, it was not the chemotherapy or infusion of a donor’s stem cells that staved off the HIV; it was the protection of the T cells by the lack of CCR5. Those procedures couldn’t completely eliminate the reservoir of the HIV virus, and when the virus came back the T cells were susceptible to infection. The [genetic] approach protects T cells from HIV and may be able to almost completely deplete the virus, as those cells are still functional,” said Pablo Tebas, director of the AIDS Clinical Trials Unit at the Penn Center for AIDS Research and a co-author of the study.

June and another co-author, Bruce Levine, had previously introduced a different genetic mutation into T cells in an effort to combat HIV/AIDS. That method also proved safe, fueling subsequent work on T cells, but the cells modified this way were not persuasively effective against the virus.

Certainly there are still a lot of mysteries when it comes to HIV/AIDS, but it’s encouraging to see a number of potential treatments emerge to replace daily drug regiments, which are expensive, grueling and hard to implement in developing countries. And it will be fascinating to see how many other diseases souped-up T cells may combat.