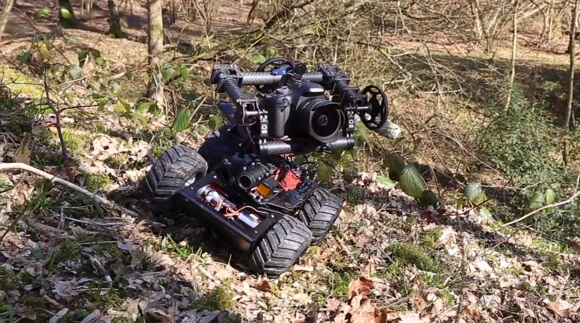 Will Burrard-Lucas is a wildlife photographer. Sometimes that means documenting dangerous animals, and of course, to do this, he needs a good zoom lens and a low profile perch. But it’s not ideal. He’d rather snuggle up with a pride of lions for some candid shots of family life on the Serengeti.

And now he can—virtually. Burrard-Lucas has been building robots (or BeetleCam) for wildlife photographers like himself for the last few years.

In an early version of BeetleCam, he attached a camera to an RC chassis. Not super high-tech, but effective. Next, he added an animal-proof shell and GoPro for video, and recently, a gyroscopic stabilization platform to keep the camera level as the bot traverses uneven ground.

We could tell you his invention is working out just fine, but a video is worth, well, probably way more than a thousand words in this case.

Of course, if a radio-controlled, gyro-stabilized camera works on the ground—why not in the air? We have the technology. Burrard-Lucas is now building (and selling) quadcopter-mounted camera rigs. These nature drones stay aloft for 15 minutes and capture the kind of shots usually reserved for helicopter rides.

Indeed, the DARPA robotics challenge was inspired by Japan’s Fukushima nuclear disaster. Robots with human capabilities and impervious to radiation could have repaired the damaged reactors. And beyond military applications, drones might be used to deliver medicine, government documents, Amazon orders—even beer.

But robots are also great for learning more about our world by going places humans can’t. Wildlife photography like Burrard-Lucas’s delivers inspiration and new perspectives—and his bots might even prove useful for scientific research.

Now, all he needs to do is replace that GoPro with a 360-degree video camera and pipe a few nature movies into an Oculus Rift. Imagine viewing classics like the Planet Earth series on a high-def VR headset. Better than Imax—on your sofa.