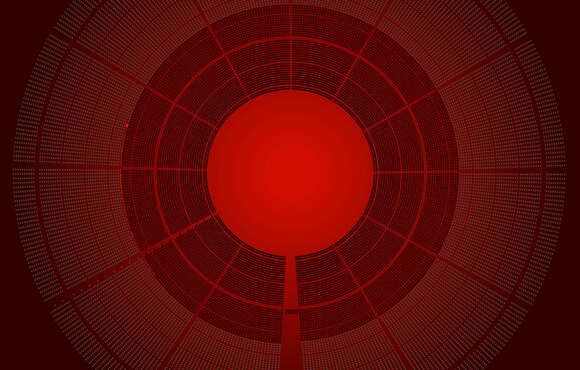 It’s hoped fitness trackers and other health wearables will enable folks to better understand themselves and experiment with healthy choices and changes in their lives.

Lowe discovered something was missing: the raw data. Because Basis doesn’t provide an open API, she had to hack her device—that was the only way she could view her actual heartbeat and not pre-processed information.

Now, twice daily, she uploads her heartbeat by USB to her computer. Below her heart rate one counter ticks up (13,216 days lived) and another ticks down (16,430 expected remaining days).

What’s the point of all this, you ask?

Big data has plenty of promise in healthcare. But it’s got a few flaws. Lowe told Fast Company it’s actually pretty difficult to access data about our own bodies, in general.

“Corporations data mine our aggregate and individual behavior—every click, every credit card purchase—to better market to us, but I can’t order a lab test of my cortisol levels because I live in New York state [where only doctors can order lab tests].”

Ownership of health data isn’t the only control we might give up to such devices. What does Lowe’s public heartbeat tell us about her?

In fact, not much right now. Basis provides an average heart rate over each minute and about 17.5% of those minutes don’t record any heart rate and have to revert to the previous minute’s average. But if it were real time and if it were live—as it may be soon enough—we could infer when she’s working, walking, sleeping. A little creepy.

Most people won’t post their stats online (or will they?) but there’s a possibility that, as the data increasingly lives on a server, an interested (and potentially malevolent) third party could view it and use it. Like your credit card information, only more sensitive, depending on who’s looking at it and why.

As the impending avalanche of health data promises earlier diagnosis and more effective treatment, securing that data and determining who controls it will be paramount.

Above all, however, Lowe’s Hal 9000 heartbeat reminds us life is fleeting. Visualizing our own mortality can wake us up and keep us awake. Or not. Speaking from the standpoint of an ever-eager, ever-failing self improver—habit’s a tough habit to kick.