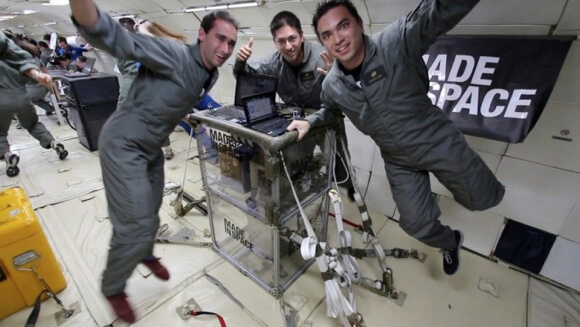 Space travel is a dangerous business. Astronauts are hurled into space in a tiny life support bubble. Contact with Earth is severed. Whatever they’ve got onboard is all they’ve got—period. But what if they could make tools and parts onboard?

Singularity University Labs startup Made In Space believes 3D printing can provide just such a capability. The idea and company got their start at the 2010 Singularity University Graduate Studies Program, and they’ve since been working on the problem. After testing the tech on parabolic flights, Made In Space and NASA will launch the first 3D printer into space for trials on the International Space Station this August.

In the beginning, 3D printing will be used to make basic tools and parts, but it may prove to be a crucial technology if humankind is to wander ever further afield. Future applications may include in-orbit construction of stations and ships or robotic construction of structures and habitats on the Moon, Mars, asteroids, and beyond.

The participants discuss the challenges of 3D printing in low-gravity environments, how 3D printing frees the design of tools, equipment, and experiments from gravity and the rigors of launch, and just how far space 3D printing might take us. Check it out! (They struggle with a few technical glitches early on, so I recommend you skip to 2:53.)

Chen says Made In Space didn’t set out to build a 3D printer so much as send one into space. But they discovered rather quickly that traditional 3D printers won’t work in low gravity. He quips if they’d known how hard it would be, they might never have started.

There are 15 or 20 things you have to change to make a traditional 3D printer ready for space, from how the plastic is laid down (the Made In Space 3D printer is now gravity independent) to how to handle toxic off-gassing in an enclosed environment.

But once you’ve got a 3D printer that works—it becomes an invaluable tool.

Chen is quick to note the Apollo 13 example. The crew had enough oxygen but faced the prospect of choking on carbon dioxide from their exhalations. The only remaining filters, intended for the command module (which the crew had temporarily evacuated), were square, while the fitting they needed to plug into was round.

NASA had to scramble to make replacement filters using only the materials on board (most famously a trusty roll of duct tape). Their solution worked, but a 3D printer would have been pretty handy just then.

Chen says Made In Space mocked up Apollo 13’s CO2 scrubber in CAD (Autodesk’s 3D modeling software) and printed the part in a couple of hours. In the future, such quick fixes could be rapidly designed and sent to the crew in emergency situations. Or in less urgent situations (e.g., when a tool breaks) the crew could print a replacement right away instead of waiting weeks or months for the next resupply mission.

Additionally, 3D printing in space changes how low-gravity technology is designed. Currently, everything we send to space has to be tough enough to withstand the rigors of launch—extreme shaking and heavy g-forces. But what if instead of launching everything, we could digitally beam it directly to a 3D printer in orbit?

Made In Space and NASA think 3D printing changes how we’ll design for space in the future—and opens the field to the crowd too.

Chen says after the first 3D printer (a technology demonstrator) is launched, they’ll send up a second 3D printer to be used as a commercial facility. And that’s when the fun really begins. Eventually, he hopes, the ingenuity of the crowd will be as easily channeled into space exploration as it is into app development for the app store.

“We’ll be opening it up so that anyone in the world can print things in space,” Chen says. “What we’re going to print that will be most exciting—I think it’s going to be the things we haven’t even thought of yet.”