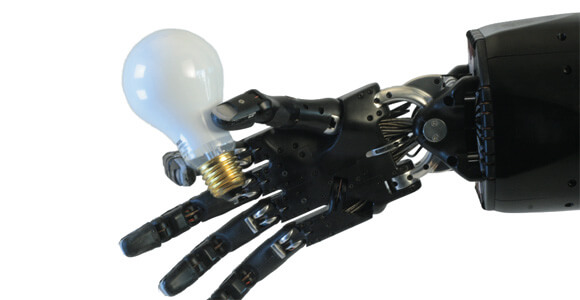 Your cat may think she’s your boss, but she would actually be your boss if it weren’t for a feat of engineering called the human hand, complete with opposable thumbs.

It’s not easy to build a robot that can compete with that astounding piece of machinery. But the UK company Shadow has a solid contender. And while its robotic hands imitate nature, why keep nature’s limitations? Shadow’s Dexterous Hand “sees” the shape of the object approaching it to help it determine how to hold it.

The hand makes clever use of Microsoft’s Kinect off-the-shelf depth sensor to size up the object it needs to grasp using a 3D point cloud. If the hand has seen the object before, it calls up instructions for the most practical shape to adopt to grasp it. If it hasn’t seen the object before, it runs artificial intelligence algorithms to guess at the best shape. (If its guess is lousy, it will feed that information back into the system to make a better effort next time.)

Capable of 24 distinct movements, the hand can come up with an almost human array of positions to hold a Rubik’s cube, business card or light bulb. The finger lengths vary like a person’s too, giving the hand a more organic feel than many of its competitors.

But it’s not just shape that robotic hands have to worry about; they also have a grip-of-death problem that means you can’t trust them with a wine glass or a raw egg. Dexterous Hand tackles that problem with the combination of a position sensor in each joint and a force sensor for each motion activator. It also includes tactile sensing on the fingertips.

Users who need to throw everything but the kitchen sink at the touch-sensitivity problem can also add optional BioTac Tactile sensors that give more detailed information on force and also note micro-vibrations and temperature gradients. (When Singularity Hub last covered Dexterous Hand, it didn’t yet feature integration with BioTac sensors.)

With all that, Dexterous Hand could just give the human hand a run for its money. Then again, pricing hasn’t been made public.

Of course, like our hands, Shadow’s hand is only as good as the arm behind it. The hand itself sits Thing-like in a stand, but Shadow has designed it to integrate into other robots. Kuka, Denso, Willow Garage, Mitsubishi and Universal Robots have all mounted a Dexterous Hand, which runs on the open-source Robot Operating System, on one of their droids.

Since hands are so specialized, even makers of robotic arms seem happy to outsource them. Different robots will likely employ different hands, but with various makers making robotic hands with different specialties — this one emphasizes precision, another emphasizes durability — that promises to work out just fine.