Modern machines, powerful and clever, have enabled us to attempt seemingly impossible tasks, like traveling to the moon. Now, mere decades after Apollo’s computers guided us to the lunar surface, millions carry vastly more processing power in their pockets. What once seemed science fiction—it’s possible today.

The incredible acceleration and exponential development of machines is driven by our unsatisfiable curiosity and constant drive for progress. And there is little doubt the rate of change will continue as our curious minds push into the unknown.

But recently, some have begun to worry we can’t control the exponential pace of technology and risk a backlash in the form of mass unemployment. As machines become ever more capable, they will replace human workers. Many experts are debating the future of technology and work, but to date, there is no easy answer.

Last year, I joined Solve for X, a program created by the Google[x] team to discover and celebrate innovators whose curiosity has led them to dare the impossible. In hopes of informing and enriching the debate, I offer a few examples and some perspective from my experience at Solve for X.

In my time at Solve for X, I’ve witnessed the future of work in the making. We seek out individuals who use science and technology to reinvent life as we know it and who choose to be bothered by the large-scale problems facing humanity. Individuals, like Henry Ford or Nikola Tesla, without whose inventions we could not live today.

Many of these projects are still in the research stage and have a long way to go. But they will produce the employers of the future. Once they have completed their research, raised money and launched companies to scale these solutions globally, they will hire human capital to grow, just as Ford did at the beginning of the last century.

So what industries will seed future companies and drive employment?

The space industry is undergoing a huge second wave of innovation. Compared to the 1960s, when the only two players aiming for the moon were the American and Russian governments, the spacescape has changed dramatically.

With lower barriers to entry, privately funded companies (e.g., SpaceX, Virgin Galactic, and others) along with startups are pushing into space and creating an internationally thriving industry. SpaceX, founded in 2002, alone counts 3,000 employees as of January—an indicator of what might lie ahead in terms of employment in this new sector. In addition, Escape Dynamics, Made In Space, StratoLaunch Systems, Planetary Resources, and Skybox are a few of the new breed of space startups.

It is the beginning of a whole new era of exploration, industry and growth.

Made In Space, who sent their 3D printer to the International Space Station last year, is not only a space startup but is also a 3D printing startup, a category of technology disrupting the manufacturing world. 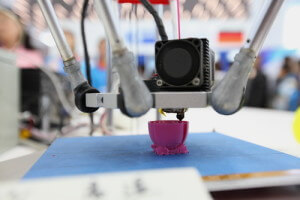 With the falling price of 3D printers, everyone can be a designer, an innovator, a creator. And in manufacturing, barriers to entry have been lowered. We may imagine 3D printing freezing existing manufacturing plants, but these scenarios lie far in the future. Many items that are manufactured in plants are produced so rapidly and at such low cost, that it will take a long time for 3D printing to catch up.

Furthermore, 3D printing is being pioneered in niche industries not catered to by the mass manufacturing world. These include items that need customization such as prosthetics (Limitless Solutions, Enabling the Future) or have complex manufacturing requirements such as airplane parts. Both Boeing and Airbus have moved into using 3D printing methods.

Like the space industry, 3D printing is just getting started and the opportunities are endless, not only for innovation but also for the creation of new jobs.

Another innovation revolution (one we can all relate to) is happening within healthcare, or more specifically, in biotechnology and genetics.

Though some may be spooked at the prospect of getting their DNA sequenced or having gene therapy, imagine a life without ever having to worry about cancer, Alzheimer’s or Parkinson’s. Other healthcare technologies are transforming chemotherapy, treatment for neurological diseases and brain injuries, and surgery (e.g., non-invasive surgical nanobots).

Technology can help us gain a deeper understanding of our bodies, diets and genes. All this will change the healthcare system we currently know and, most likely, many jobs too.

An example of this might be the push into genetic sequencing. An industry that did not exist 20 years ago is growing fast with companies such as 23andme, Calico, The Human Longevity Institute and Illumina, creating not only new treatment methods but also new jobs. So, while some traditional jobs might disappear, we will see many new ones being created.

Today, when the priority is on diagnosis and treatment, doctors have less time to focus on the human touch. 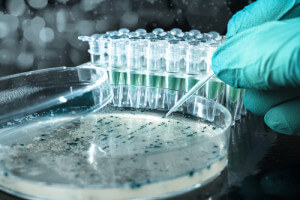 In the future, diagnosis will be more automated (as doctors are aided by artificial intelligence) and early detection and prevention will ease treatment. This will allow for extensive, personalized care currently not possibly due to the high demand of medical experts to save lives, rather than providing routine care for patients. And it is exactly the personal touch, that won’t be able to be replaced by machines anytime soon.

These are just a few examples of potential growth industries I have seen firsthand at Solve for X. And there will be others—some of which we can’t yet even imagine.

As much as our curious minds keep driving innovation, they will also always seek adaptation. So, as exponential technologies change the way we live, we will iterate and adapt to the new set of problems, opportunities and circumstance we face.

After all, this behavior of adaptation is genetically encoded in us and has allowed us to evolve into the species we are today.