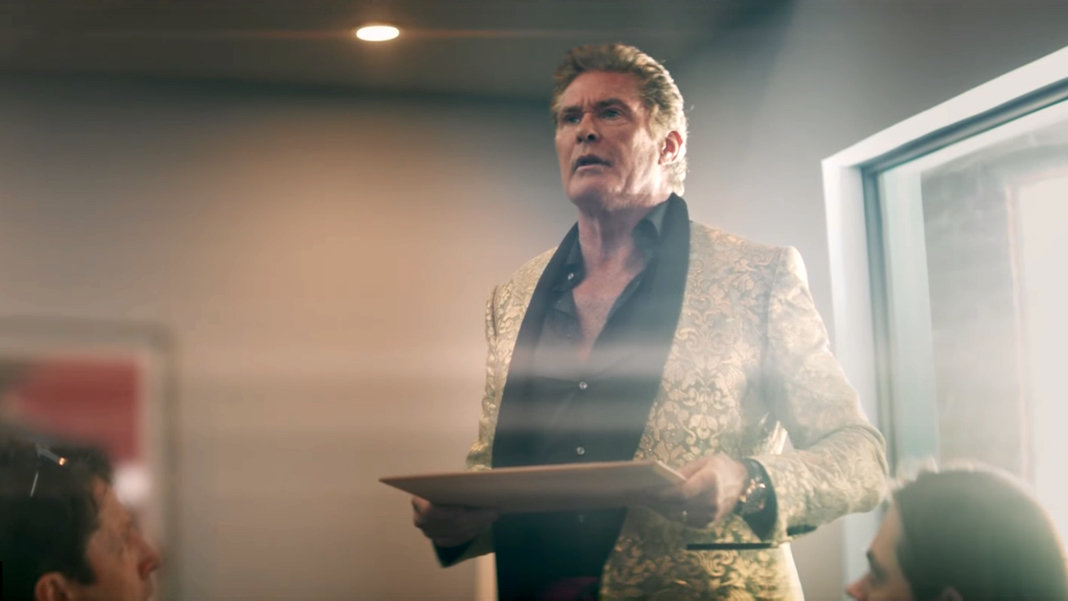 Last year, an AI named Benjamin wrote a weird and entertaining science fiction short film called Sunspring. Now, Benjamin’s back in a new film titled It’s No Game. Like its predecessor, the short is a surprisingly effective blend of human and machine talent—plus a healthy dose of the surreal.

Watch the film below to see David Hasselhoff, compelled by nanobots, reel off algorithmically mashed up lines from Knight Rider and Baywatch scripts.

Artificial intelligence is perhaps a bit overhyped currently. Rapid progress in a variety of difficult AI problems has us, at times, confusing future possibilities with present capability. The AI timeline tends to go missing, and human obsolescence in the face of superintelligence appears imminent.

Because AI competes with our proudest assets, such as intelligence and creativity, the response is fearful. What exactly is our value in a world where we’re outperformed by algorithms at basically everything? It’s a fascinating and important question. There is no answer. But we have time to figure it out.

AI is still the narrow type. Most algorithms are excellent, even superhuman, at the task for which they’re designed, but ill-suited for anything else. And there are yet some tasks just beyond AI’s reach. Writing is one of them. It’s No Game is self-aware enough to call out the worry—writers replaced by robots—right next to the still glitchy (but awesome) output of an artificial neural network.

Benjamin’s writing relies on whatever content is fed into it. In this case, instead of X Files scripts (as in Sunspring), we’re treated to multiple segments inspired by Shakespeare, Golden Age Hollywood, Aaron Sorkin’s fast-paced politics, and of course, Baywatch and Knight Rider.

The output tends toward the nonsensical, but mostly, that’s okay. Quick, dense lines from Aaron Sorkin’s work, for example, can be as much about the emotional sense communicated by the actors as they are about content.

“People will watch a Sorkin movie and not take in what’s being said, [but] understand the thrust of the scene and know what’s going on,” says the Walking Dead’s Thomas Payne, who plays one of the screenwriters in the film.

Which is basically why Benjamin’s stuff works here. It’s up to the cast and crew’s sense of timing and delivery to make the lines meaningful. David Hasselhoff time travels to make those disembodied 80s snippets into an unmistakable resurrection of “the Hoff” himself. And the freaked out, confused scene at the end ironically echoes our larger existential worries.

We may be headed into a world of artificial general intelligence, and that world may arrive faster than conservative guesses suggest. But make no mistake, even narrow AI is very powerful. And artists, entrepreneurs, and researchers will no doubt continue to work with such algorithms to make surprising new creations, from the purely useful to the bizarre and fascinating.

(Check out Annalee Newitz’s article in Ars Technica for an excellent and comprehensive behind-the-scenes look at the making of It’s No Game.)