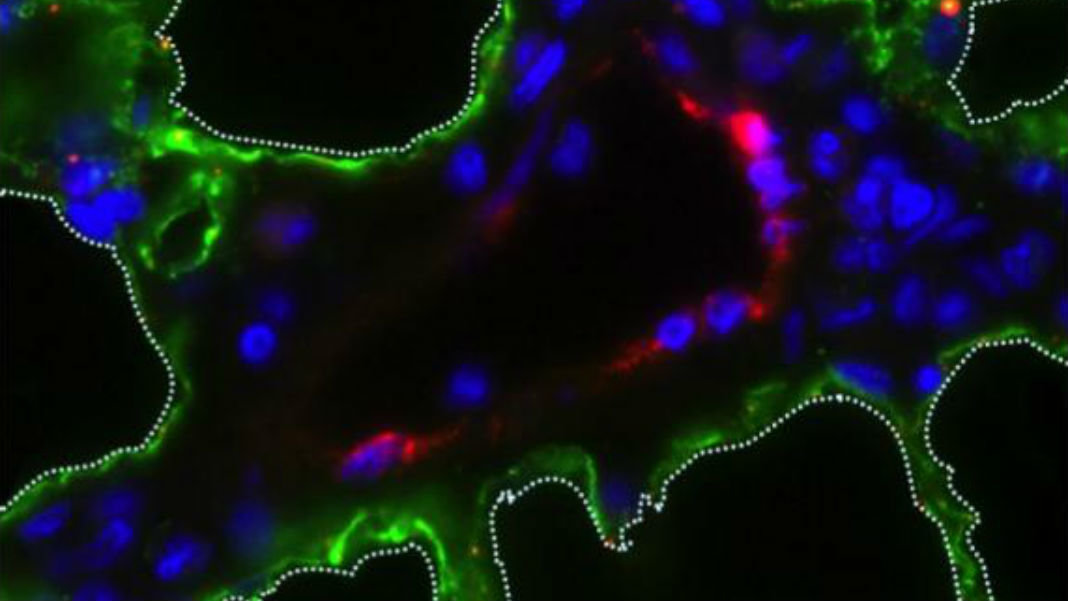 Save for the occasional burning pain that accompanies a run, most people don’t pay much attention to the two-leafed organ puffing away in our chests.

But lungs are feats of engineering wonder: with over 40 types of cells embedded in a delicate but supple matrix, they continuously pump oxygen into the bloodstream over an area the size of a tennis field. Their exquisite tree-like structure optimizes gas exchange efficiency; unfortunately, it also makes engineering healthy replacement lungs a near-impossible task.

Rather than building lungs from scratch, scientists take a “replace and refresh approach”: they take a diseased lung, flush out its sickly, inflamed cells and reseed the empty matrix with healthy ones.

It’s an intricate procedure—nevertheless, the delicate branches of blood vessels are often completely destroyed during the process. Without blood to deliver nutrients and molecules to the newly seeded cells, the graft fails.

What if, thought Dr. Gordana Vunjak-Novakovic at Columbia University, rather than removing all cells from a donor lung, we gently clean out only the diseased cells in the airway without touching blood circulation?

When researchers added back therapeutic human cells that line the lung’s airways to a rat lung scaffold, the foreign cells—in this case, epithelium cells—homed to the correct location, attached, and thrived.

Dr. Matthew Bacchetta, who also worked on the project, sees the method as a “transformative” way to obtain lungs ready for transplant. Because lungs are notoriously bad at repairing themselves, in severe cases the only real option is a transplant.

It’s a hard sell—only up to 20 percent of patients are still alive ten years later, the procedure is expensive, and the demand for donor lungs far exceeds the supply.

These new “vascularized” lungs bring us one step closer to the penultimate goal: transplanting lungs made from a patient’s own cells, seeded onto a donor scaffold from a cadaver or even primate or pig.

The patients’ cells give the scaffold a complete immune makeover, lowering the risk of immune rejection—a main reason why transplants fail.

“As a lung transplant surgeon, I am very excited about the great potential of our technique,” he says.

Engineering functional lungs is nothing short of a moonshot, even in the ambitious field of regenerative medicine.

The lung is a real jungle: at the microscopic level, the tree-like airways contain alveoli, tiny bubble-like structures where the lungs exchange gas with our blood. Both arteries and veins enwrap the alveoli like two sets of mesh pockets.

At least a half dozen cellular denizens work in tandem to keep the alveoli spheres inflated, to guard the organ against infections, and to enforce the structure of its many branches.

This three-dimensional complexity is why we ruled out the possibility of growing lungs from scratch, explains Dr. Laura Niklason, a biomedical engineer at Yale University who was not involved in the new study.

Back in 2010, Niklason had a brilliant idea: rather than relying on synthetic templates that mimic the organ’s intricate structure—a “very tall order,” she says—scientists could use nature’s own template, the lung’s matrix, as a jumping off point.

Niklason’s approach is similar to stripping down a house to its bare bones—weight-bearing beams, struts and bolts—and reworking the rest to its new owner’s tastes.

As a proof-of-concept, Niklason’s team used a detergent that washed away the cells and blood vessels from a rat lung. They then soaked the lung matrix scaffold inside a “bioreactor” that mimics the conditions of a growing fetus.

When the team reseeded the scaffold with a cocktail of cells, the lung regrew its blood vessels, alveoli and tiny airways with the right types of cells—all within four days.

In the ultimate test of functionality, Niklason’s team transplanted the regrown lungs back into living rats. A few seconds later, the lung inflated, turning bright red as it took in oxygen and blood supply.

It’s just an initial step, the team wrote at the time. The lungs only survived up to two hours in the donor’s body, and subsequent analysis revealed bleeding and blood clots within the airway and regrown capillaries.

One potential reason is this: the blood vessels may not have formed proper junctions with the alveoli. While still allowing gas exchange, this eventually causes blood leaks into the lungs.

If newly-grown blood vessels form malfunctioned junctions, why not preserve the originals instead?

Adapting Niklason’s technique, the team inserted a tube into the airway of a newly harvested rat lung and pumped through a gentle detergent that only removed the lung’s epithelial cells—the inner lining.

Blood vessels, in contrast, were washed with an electrolyte solution similar to Gatorade.

With this small change, we removed over 70 percent of epithelial cells—which are often the root of lung diseases—but maintained the vasculature, the authors say.

Like cartographers mapping a new land, the team next probed the integrity of the vessels. Injecting tiny beads that glow under UV light into the lung’s main artery, they watched as the beads flooded the twisting capillaries, glowing bright within the larger vessels.

In contrast, there were no obvious signs of glowing beads within the airway or alveoli, suggesting that the blood vessels were intact—no leakage!

With scaffold in hand, the team next marinated the structure with human lung epithelium cells. As a bonus, they also used lung cells derived from induced pluripotent stem cells (iPSCs). iPSCs are made from a patient’s own cells—often skin cells—and can be coaxed to become nearly any other cell type with the right cocktail of signals.

Because iPSCs retain the person’s immune profile, scaffolds seeded with these cells have a much lower chance of being rejected.

Within a mere 24 hours, the team detected signs of the newly seeded cells within the lung scaffolds. Under the microscope, the newcomers attached to the right spot, stabilized and begun rapidly dividing to repopulate the missing cells.

The lung grafts also had a boost in breathing power—they could expand more fully—gaining back roughly 50 percent of what was lost during the detergent treatment.

The study stops short at the final test: transplanting the engineered lung back into a recipient. As with older generation scaffolds, the newly minted lungs could also develop deadly blood clots or bleeding once reintroduced into a living, breathing animal.

What’s more, the team only used a mild detergent in their preparation to preserve the lung’s integrity. The result was a partial cleanout with some of the rats’ own epithelial cells still intact.

These injured stragglers may provide important information to the new, healthy cells, so this could be an unexpected bonus, the authors explain. Whether they are friend or foe will have to be tested in a future study.

The technology needs a lot more work before it could be used in humans, but Vunjak-Novakovic and colleagues are already excited about potential new treatment options.

This study provides proof-of-concept evidence that our approach works, the authors write. We show, for the first time, that it’s possible to wash out diseased lung epithelial cells without touching blood vessels.

What really gets the team excited is this: although freshly harvested rat lungs were used in this study, in theory the method could be used without removing the lung.

This is “transformative:” patients with injured lung epithelial cells could be irrigated with the detergent to remove the sickly cells. Doctors can then harvest their skin cells and transform them into healthy lung cells to reseed the lung.

“Every day, I see children in intensive care with severe lung disease who depend on mechanical ventilation support,” says Dorrello. We may be on our way to an entirely new treatment solution for these patients and regenerate their broken lungs, he says.