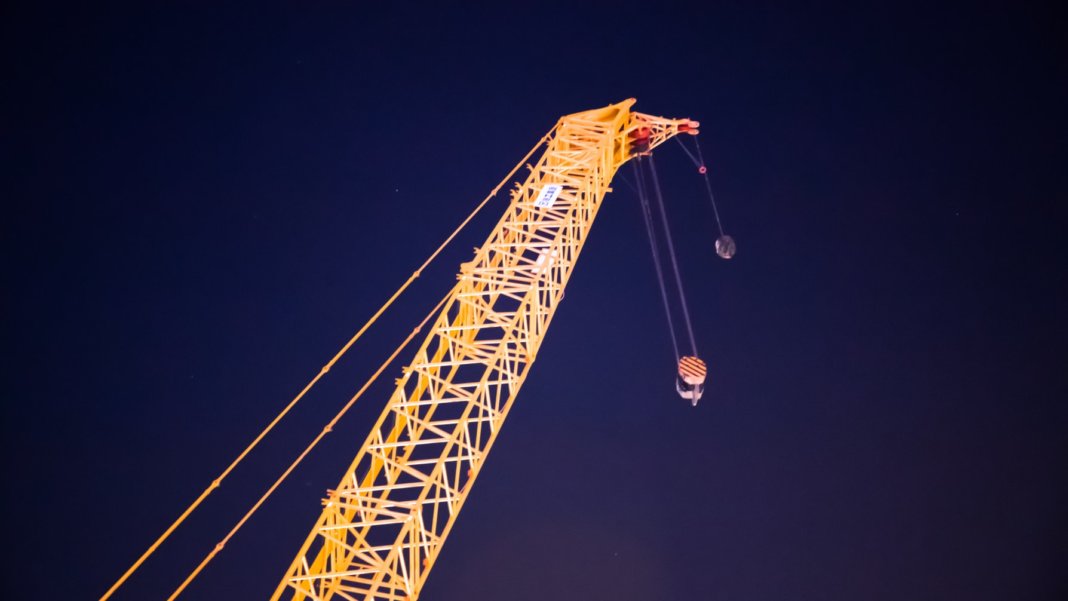 The energy transition is underway. It’s not just crucial for climate change that we kick our fossil fuel habit—it will soon be more expensive not to. In the UK, for example, it’ll soon be cheaper to build new offshore wind farms than even to run existing natural gas power plants. This is mirrored by declining prices for renewables around the world.

However, as we electrify heating and transport, electricity demand will increase. To match supply and demand with intermittent renewables, it seems likely that we’ll need a great deal more energy storage. So it will come as no surprise that Softbank is investing $110 million in a storage startup called Energy Vault. What may be more surprising is the method they’re choosing for storage: lifting giant blocks of cement with a crane as a form of mechanical energy storage.

For once, the physics here is simple enough: lifting the block stores energy in the form of gravitational potential energy, which can be released as kinetic energy to spin turbines when the blocks are lowered, essentially just running the motors in reverse. Energy Vault envisions cranes 35 stories high, with 6 arms, which will stack the concrete blocks around itself when power generation exceeds demand.

When complete, Energy Vault expects that each site will be capable of storing 35 megawatt hours and delivering a peak power of 9 megawatts if required.

At first glance, it’s a pleasingly low-tech solution to a modern problem. Batteries require rare-earth metals, which can raise their own supply-chain issues: child labor digging out cobalt in the Democratic Republic of the Congo is one notable example, and while the lithium for li-ion batteries is not expected to run low soon, this may change as demand increases. Meanwhile, Energy Vault hopes to use mostly waste cement that is likely to be disposed of anyway, and its material demands are much less complicated.

It’s likely also to be cheaper than lithium-ion, at least for the next decade or so. The company expects to be able to sell storage for $150 per kilowatt hours by the time it builds its tenth plant, which is around half of the $280-350/kWh currently required for lithium-ion storage on the grid. Unlike batteries, the storage capacity won’t reduce over time as the unit is “charged” and “discharged,” and so it may well have a longer lifespan than battery farms, 30-40 years.

It’s also a highly efficient process, limited mostly by friction. Energy Vault claims that up to 90 percent of the electricity stored can be recovered, which is substantially better than the 70 percent efficiency of pumped hydro.

So given that mechanical energy storage uses physics that a schoolkid would understand, is cheaper and easier to manufacture than batteries, and is highly efficient, why isn’t it everywhere?

There are plenty of startups out there promising to do mechanical storage; examples include Gravitricity and Advanced Rail Energy storage, which both lift weights to store energy. Teraloop would store energy in spinning wheels held aloft by magnetic levitation. This is similar to the flywheels that temporarily store energy for the experimental JET fusion reactor so that it doesn’t cause blackouts in Oxfordshire every time it’s switched on.

Compressed air energy storage has been advocated by many for many years. The first storage plant was built in 1978 and has successfully operated for decades. However, it still only accounts for a tiny fraction of total energy storage, and has seen several startups fail after millions of dollars of investment, even as new startups continue to spring up. The current adviser for Energy Vault founded a previous mechanical energy storage company, called Energy Cache, which generated a lot of hype and a demo project back in 2012 but never managed to scale up.

Looking at the litany of mechanical energy storage startups that have petered out in recent years, it’s hard not to question whether we really will see thousands of cranes providing storage for the grid. Competing with lithium-ion, now an established industry churning out batteries for electric vehicles as well as grid storage, will be difficult.

Energy storage costs would have to fall substantially to make a 100 percent renewable grid feasible. But most of those costs come from rare events, like an unusual period of a few weeks where demand is high and generation is low.

Providing baseload or top-up generation with nuclear power, or biomass plus carbon capture, is one option to reduce these costs. Cheap, long-term storage could provide another. While the capacity of batteries degrades over time, and installing enough of them to cover seasonal demand is materially costly, mechanical solutions like Energy Vault may be able to fill the gap.

There’s a growing demand for energy storage, and no shortage of clever ideas for how to achieve it. Time will tell which method ultimately proves to be the holy grail for the grid. But one must imagine Sisyphus happy—after all, it turns out his predicament was worth millions of dollars of venture capital.