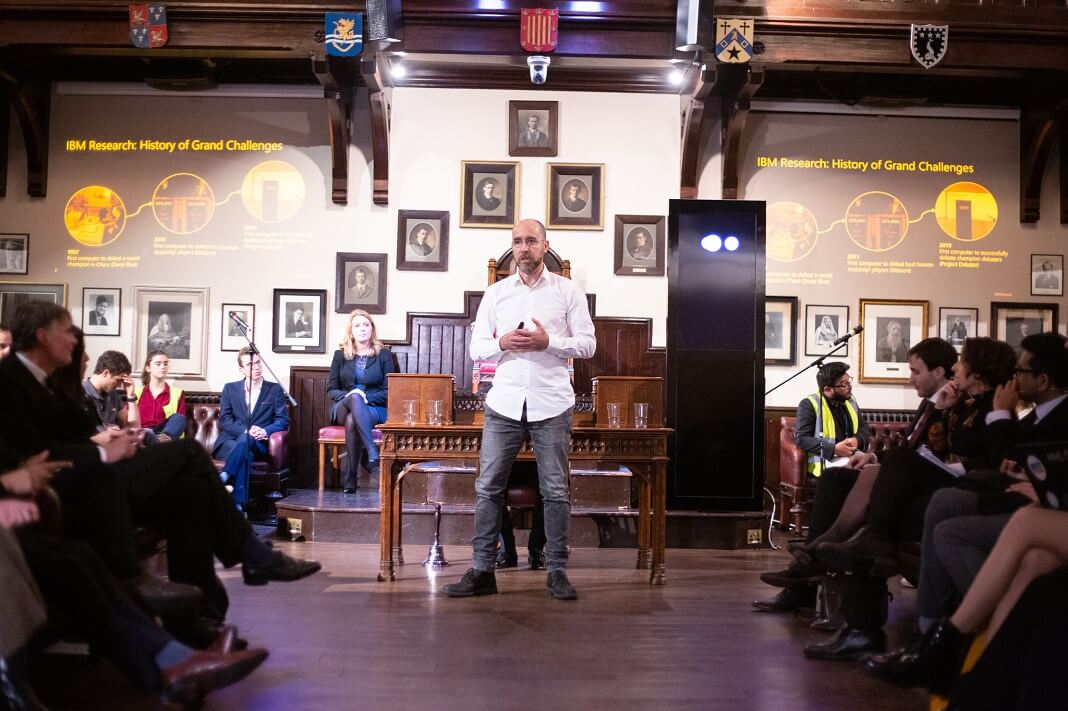 Artificial intelligence is going to overhaul the way we live and work. But will the changes it brings be for the better? As the technology slowly develops (let’s remember that right now, we’re still very much in the narrow AI space and nowhere near an artificial general intelligence), whether it will end up doing us more harm than good is a question at the top of everyone’s mind.

What kind of response might we get if we posed this question to an AI itself?

Last week at the Cambridge Union in England, IBM did just that. Its Project Debater (an AI that narrowly lost a debate to human debating champion Harish Natarajan in February) gave the opening arguments in a debate about the promise and peril of artificial intelligence.

Critical thinking, linking different lines of thought, and anticipating counter-arguments are all valuable debating skills that humans can practice and refine. While these skills are tougher for an AI to get good at since they often require deeper contextual understanding, AI does have a major edge over humans in absorbing and analyzing information. In the February debate, Project Debater used IBM’s cloud computing infrastructure to read hundreds of millions of documents and extract relevant details to construct an argument.

This time around, Debater looked through 1,100 arguments for or against AI. The arguments were submitted to IBM by the public during the week prior to the debate, through a website set up for that purpose. Of the 1,100 submissions, the AI classified 570 as anti-AI, or of the opinion that the technology will bring more harm to humanity than good. 511 arguments were found to be pro-AI, and the rest were irrelevant to the topic at hand.

Debater grouped the arguments into five themes; the technology’s ability to take over dangerous or monotonous jobs was a pro-AI theme, and on the flip side was its potential to perpetuate the biases of its creators. “AI companies still have too little expertise on how to properly assess datasets and filter out bias,” the tall black box that houses Project Debater said. “AI will take human bias and will fixate it for generations.”

After Project Debater kicked off the debate by giving opening arguments for both sides, two teams of people took over, elaborating on its points and coming up with their own counter-arguments.

In the end, an audience poll voted in favor of the pro-AI side, but just barely; 51.2 percent of voters felt convinced that AI can help us more than it can hurt us.

The software’s natural language processing was able to identify racist, obscene, or otherwise inappropriate comments and weed them out as being irrelevant to the debate. But it also repeated the same arguments multiple times, and mixed up a statement about bias as being pro-AI rather than anti-AI.

IBM has been working on Project Debater for over six years, and though it aims to iron out small glitches like these, the system’s goal isn’t to ultimately outwit and defeat humans. On the contrary, the AI is meant to support our decision-making by taking in and processing huge amounts of information in a nuanced way, more quickly than we ever could.

IBM engineer Noam Slonim envisions Project Debater’s tech being used, for example, by a government seeking citizens’ feedback about a new policy. “This technology can help to establish an interesting and effective communication channel between the decision maker and the people that are going to be impacted by the decision,” he said.

As for the question of whether AI will do more good or harm, perhaps Sylvie Delacroix put it best. A professor of law and ethics at the University of Birmingham who argued on the pro-AI side of the debate, she pointed out that the impact AI will have depends on the way we design it, saying “AI is only as good as the data it has been fed.”