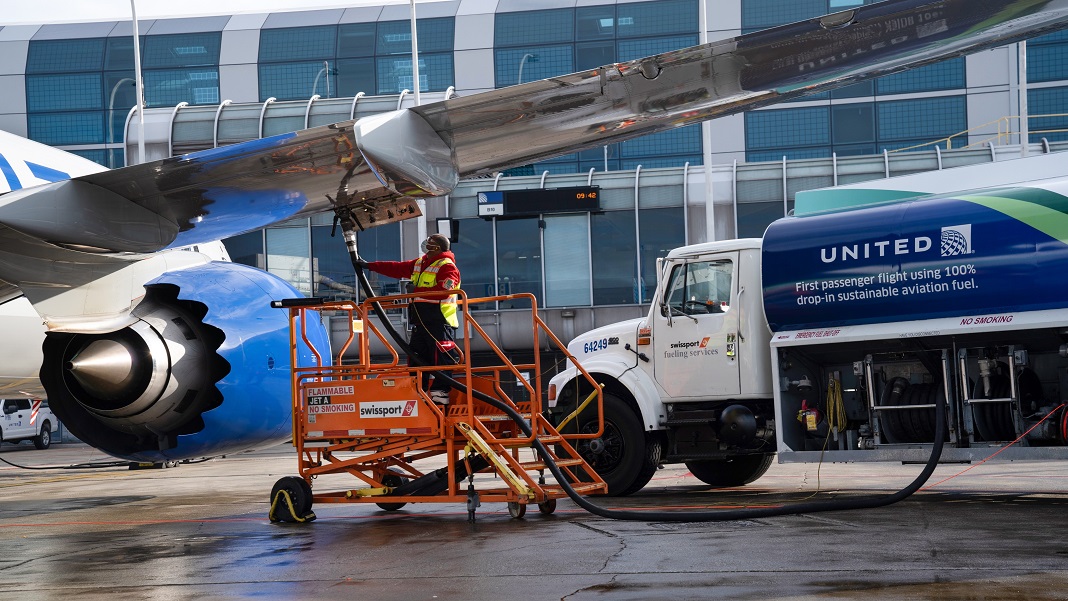 The global aviation industry is responsible for two percent of the world’s total carbon emissions. Some countries are having success convincing people to fly less, but let’s be honest—we’re not going to stop taking planes to far-away places altogether. In fact, the opposite will happen, with demand for air travel increasing; by one estimate, the global fleet of aircraft could nearly double by 2039, from 25,900 in 2019 to 49,405.

So the search is on for ways to make flight more sustainable, from investing in electrification technology (but the batteries are still too heavy and not energy-dense enough), contemplating bringing back airships (but will we ever really get over the Hindenburg?), and developing alternative fuels to run the combustion engines of existing planes.

This week saw an important step forward for the alternative fuel effort, as the first-ever commercial flight powered by sustainable fuel completed a trip from Chicago to Washington DC. The 737 MAX 8 had over 100 passengers onboard, including members of Congress and United CEO Scott Kirby.

Aviation history is cleared for takeoff.

The flight’s fuel was made by World Energy and Virent Inc., and was composed of cooking oil and fat mixed with synthetic compounds made from the sugar in plants like corn, beets, and sugar cane. This fuel reportedly creates 80 percent less carbon emissions than regular jet fuel. The plane had 500 gallons of this fuel in one engine and 500 gallons of conventional fuel in the other “to further prove there are no operational differences between the two,” a United representative said. The conventional fuel was there as a backup and wasn’t used.

Previous United flights have used a mix of conventional and sustainable fuel, but regulations only allow up to a 50 percent mixture. Part of the goal of this week’s flight was to demonstrate that planes can fully rely on sustainable fuel.

What many people don’t know is that airlines and aircraft manufacturers have already taken multiple steps to cut their carbon footprint and make flying more efficient. From 2000 to 2013, the fuel efficiency of the average plane on domestic US flights improved by more than 40 percent, and that of heavier jets on international flights by 17 percent. Incorporating lighter-weight materials like carbon fiber into planes has made a difference, as has implementing technologies like winglets, flexible navigation systems, and continuous climb and descent operations.

Unfortunately, though, the impact of all this pales in comparison to that of the gas being burned in the planes’ engines. “Today, at least at United Airlines, 98 percent of the greenhouse gas emissions across our entire operations are from consuming jet fuel as we fly our planes,” said Lauren Riley, United Airlines’ director of global environmental affairs and sustainability.

The issues preventing wider adoption of sustainable fuel are most likely to be regulatory and supply-chain related. The existing jet fuel industry didn’t spring up overnight; it’s taken decades to reach its current state, with oil companies, airlines, aircraft makers, regulators, and others all acting as pieces of a finely-tuned machine. To recreate that with a whole new type of fuel coming from entirely different sources will not happen quickly, and will doubtless be riddled with complications and bureaucracy.

Not to mention, scaling production of a fuel like the one United used will require heavy investment, research and development, and likely more bureaucracy. According to Riley, United is the market leader in sustainable fuel, but its available supply comprises less than 0.1 percent of its total fuel supply—that’s barely a drop in the bucket. Meanwhile, Kirby estimated it will cost $250 billion to scale up sustainable aviation fuel production to the point where its use is routine.

It will be a long, slow, and probably painful process—but it’s not impossible, and the wheels (wings?) have already been set in motion. As World Energy CEO Gene Gebolys put it, “When we fly, we connect, and our demand for the connections aviation makes possible are only going to grow. But we need to develop affordable, high energy density, low-carbon liquid fuels at scale everywhere to allow those connections to be made sustainably…The flight path ahead will require tremendous teamwork.”