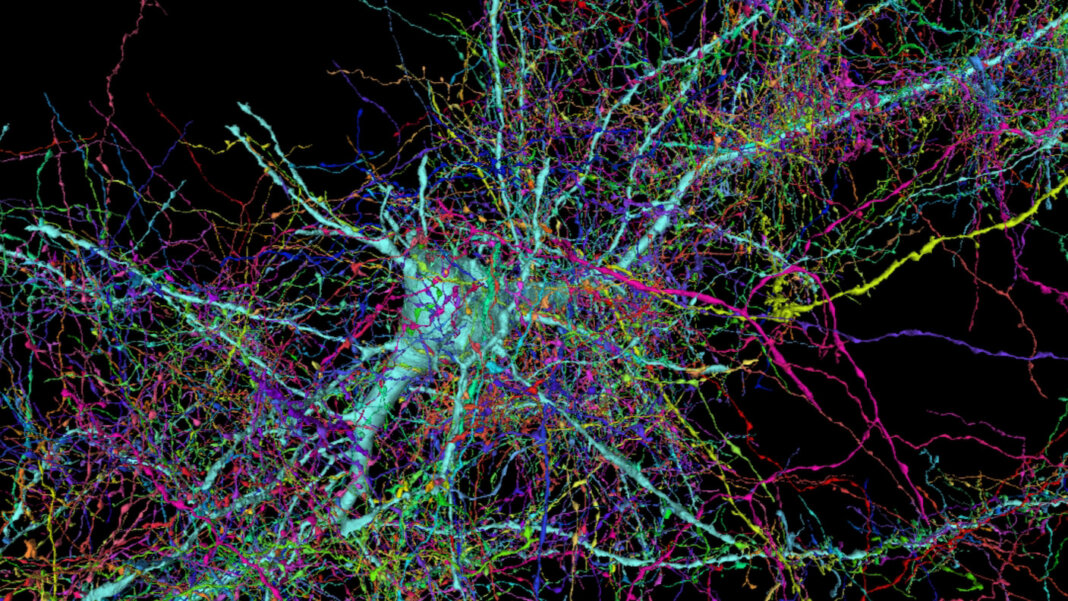 Our quest to understand the brain’s connections is a bit like aliens trying to understand Earthlings from outer space. Imagine having to track down every single person and their conversations across different continents, reconstruct noisy snippets into coherent messages, and from that data, infer the zeitgeist of the human race.

That, essentially, is what neuroscientists are trying to achieve with brain maps. Massive projects are racing to trace connections among the brain’s data-crunching inhabitants, neurons—collectively called the connectome. And if we can “listen in” on those conversations, we can decipher the brain’s inner workings which power our memories, thoughts, and behaviors.

The idea isn’t without controversy. The brain is a highly flexible, adjustable, and adaptive being. One main contention is that a connectome—any connectome—is just a snapshot in time, with little potential to reflect a broader population. To skeptics, tracing a connectome is like predicting traffic patterns by staring at a paper map: utterly impossible.

This year overhauled that criticism. For the first time, scientists were able to predict reproductive behaviors of one animal, the lab-darling roundworm C. elegans, using an algorithm based on its connectome. A book-length map of another lab-favorite critter, the fruit fly, dazzled neuroscientists with new insights into spatial navigation, with implications from virtual reality (VR) to robotics.

Also in play are hefty projects to map our own brains, across ages and for diverse neurological disorders. Even Google is on board, providing computational resources to deal with an explosion of data and processing requirements, eyeing potential input for advancing AI.

Mapping the brain is an unenviable task with a staggering scale of complexity.

The first step in the venture took stock of the brain’s hardware—the types of neurons that form the basis of neural computation. The second traced where neurons branch out to connect with others—either immediate neighbors or far-off partners across brain regions. For connectomics, the next sprint forward is less about hardware and more about hard questions: what can brain maps actually tell us about how the brain works?

Here’s where this year’s studies shone.

“It was really striking how clear the link was,” said study author Dr. Vladislav Susoy.

Another years-long project came to fruition with fruit flies (no pun intended). A favorite model animal in neuroscience, flies are smart navigators and fierce warriors eager to tussle when faced with a foe. Yet how their poppy seed-sized brain, with hundreds of thousands of neuronal branches that tangle into a cotton ball, powers those behaviors remains unsolved. This year, a team traced a tiny chunk of the fly’s brain used for navigation—a huge step up from C. elegans. The work mapped roughly 25,000 neurons and 20 million connections, resulting in a trove of data that’s already led to new theories on spatial navigation.

“It’s really extraordinary,” said Dr. Clay Reid at the Allen Institute to the New York Times. “I think anyone who looks at it will say connectomics is a tool that we need in neuroscience—full stop.”

Worms and flies may seem “meh,” but they’re indispensable for studying basic neuron function and physiology. They also provide a peek of what’s to come. As the studies show, the brain’s wiring diagrams are instrumental in helping scientists investigate existing theories and explore new ones. And connectomes are readily scaling up to mice and men.

For example, the MouseLight Project is mapping connections across the mammalian brain. MICrONS is creating one of the largest roadmaps of neural connections in mice, distilling algorithms that power the cortex, with the aim of engineering better AI.

“What we’re trying to do here is understand the brain on its own terms,” said Reid, who works on the MICrONS project.

For human brains this year, the decade-long Human Connectome Project (HCP) expanded brain maps from healthy people to those with early psychosis. In an effort to battle age-related brain issues, they also began synthesizing brain maps in people as they age.

These maps are rough. Unlike animal studies, the data are captured with fMRI (functional Magnetic Resonance Imaging), with far less resolution than mapping single neurons and their connections. It’s much more seeing the forest rather than the trees.

Yet that may be the fastest way forward. Jumping from flies to mice to men will require a leap in data processing technologies. To build a connectome, brains are generally sliced into wafer-thin sections, chemically treated, and imaged independently under a microscope. Reconstructing individual images into a brain region, or whole brain, is like using the panorama feature on a smartphone, and a behemoth computational task. It’s also high stakes—mess up one brain section, and it derails the whole project.

But there’s hope. A few months back, a Harvard-Google collaboration revealed an enormous high-resolution scan of the human brain. Their secret sauce was to tap into supercomputers to speed up the image stitching process, automating what was traditionally a giant pain point.

“It’s a great challenge for supercomputing—that’s what makes it exciting,” said Dr. Sebastian Seung, a prominent supporter of connectomics. “You don’t want to build a supercomputer and let it sit there. You need to find problems at the frontier.”

New brain mapping technologies are in the works. One strategy, called Tomo-SEM, uses a technique similar to a CT scan to image a brain, one slice at a time, without the need to chop it up. Another, TEM (transmission electron microscopy), images brain slices under a special microscope that is far cheaper and has outstanding resolution. Similar to genome sequencing, scientists are hopeful that the cost—both in terms of time and funds—will rapidly decline as new technologies are developed.

Although they’re a great start, the maps by themselves won’t be enough to decode brain function. As the fly study thoroughly showed, translating connections into behavior will take enormous analyses. For example, a physical connection between neurons doesn’t necessarily mean a functional one. Like a defunct road on Google Earth, it may be an unfortunate fluke.

The brain’s connections are also highly plastic, in that depending on age and experience, they’ll change. For some, this calls into question how valuable connectomes are, as they only capture a snapshot. Adding to the debate is whose connectome we should sequence first. Differences in age, gender, socioeconomic status, and health could massively change a person’s neural connections. Who gets to be the “reference point” for all human brains?

As the young field of connectomics reaches its teenage years, many details still need ironing out. But to Dr. Ken Hayworth at Janelia, “What’s exciting about connectomics is instead of waving your hand and thinking this circuit is how the brain computes, now you get the actual circuitry behind it.”