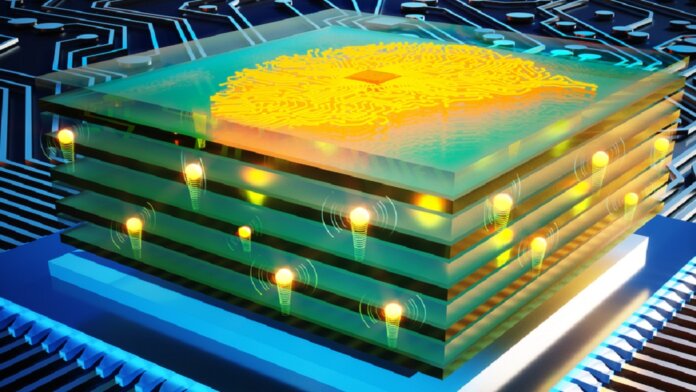 Researchers have been trying to build artificial synapses for years in the hope of getting close to the unrivaled computational performance of the human brain. A new approach has now managed to design ones that are 1,000 times smaller and 10,000 times faster than their biological counterparts.

Despite the runaway success of deep learning over the past decade, this brain-inspired approach to AI faces the challenge that it is running on hardware that bears little resemblance to real brains. This is a big part of the reason why a human brain weighing just three pounds can pick up new tasks in seconds using the same amount of power as a light bulb, while training the largest neural networks takes weeks, megawatt hours of electricity, and racks of specialized processors.

That’s prompting growing interest in efforts to redesign the underlying hardware AI runs on. The idea is that by building computer chips whose components act more like natural neurons and synapses, we might be able to approach the extreme space and energy efficiency of the human brain. The hope is that these so-called “neuromorphic” processors could be much better suited to running AI than today’s computer chips.

Now researchers from MIT have shown that an unusual artificial synapse design that mimics the brain’s reliance on shuttling ions around could actually significantly outperform biological ones. The key breakthrough was finding a material that tolerates extreme electric fields, which dramatically improved the speed with which ions could move.

“The speed certainly was surprising,” Murat Onen, who led the research, said in a press release. “Normally, we would not apply such extreme fields across devices, in order to not turn them into ash. But instead, protons [which are equivalent to hydrogen ions] ended up shuttling at immense speeds across the device stack, specifically a million times faster compared to what we had before.”

While there are a variety of approaches to neuromorphic engineering, one of the most promising is analogue computing. This seeks to design components that can exploit their internal physics to process information, which is much more efficient and direct than carrying out complex logic operations like conventional chips do.

So far, a lot of research has focused on designing “memristors”—electronic components that control the flow of current based on how much charge has previously flowed through the device. This mimics the way that connections between biological neurons increase or decrease in strength depending on the frequency with which they communicate, which means these devices could in principle be used to create networks with similar properties to biological neural networks.

Perhaps unsurprisingly, these devices are often built using memory technologies. But in a new paper in Science, the MIT researchers argue that components optimized for long-term information storage are actually ill-suited to carrying out the regular state transitions required to continually tune connection strengths in an artificial neural network. That’s because physical properties that ensure long retention times are typically not complimentary to those that allow high-speed switching.

This is why the researchers have instead designed a component whose conductivity is regulated by the insertion or removal of protons into a channel made of phosphosilicate glass (PSG). To a certain extent, this mimics the behavior of biological synapses, which use ions to transmit signals across the gap between two neurons.

However, that’s where the similarities end. The device features two terminals that are essentially the input and the output of the synapse. A third terminal is used to apply an electric field, which stimulates protons to move from a reservoir into the PSG channel or vice versa depending on the direction of the electric field. More protons in the channel increase its resistance.

The researchers came up with this general design back in 2020, but their earlier device used materials that were not compatible with chip design processes. But more importantly, the switch to PSG has dramatically increased the switching speed of their device. That’s because nano-sized pores in its structure enable the protons to move very quickly through the material, and also because it can withstand very strong electric field pulses without degrading.

More powerful electrical fields give the protons a massive speed boost and are key to the device’s ability to outperform biological synapses. In the brain, electric fields have to be kept relatively weak because anything over 1.23 volts (V) causes the water that makes up the bulk of cells to split into hydrogen and oxygen gas. This is largely why neurological processes occur on the scale of milliseconds.

In contrast, the MIT team’s device is capable of operating at up to 10 volts in pulses as short as 5 nanoseconds. This allows the artificial synapse to operate 10,000 times faster than its biological counterparts. On top of that, the devices are only nanometers across, making them 1,000 times smaller than biological synapses.

Experts told New Scientist that the device’s three-terminal setup, as opposed to the two found in most neuron models, might make it difficult to run certain kinds of neural networks. The fact that the protons have to be introduced using hydrogen gas also presents challenges when scaling the technology up.

There’s a long way to go from an individual artificial synapse to large networks that are capable of carrying out serious information processing. But the exceptional speed and tiny size of the components suggest that this is a promising direction in the search for new hardware that can match or even exceed the power of the human brain.