The most extensive bilateral arm transplant to date has been successfully achieved thanks to an interdisciplinary team of doctors and nurses at John Hopkins Hospital. The operation, which was performed on December 18, lasted 13 hours and involved 16 physicians from orthopedics, vascular medicine, plastic surgery, and other disciplines from five hospitals.

Today, the 26-year-old patient, Sergeant Brendan Marrocco, can flex his left arm at the elbow along with slightly rotating his wrist, though the feeling in his hands have not returned.

For the procedures, two different approaches were involved for each arm to preserve Brendan’s residual limbs. As Dr. Andrew Lee, who headed the transplant team, reported to KTLA, the right arm had “an above-elbow transplant by connecting the bone, muscles, blood vessels, nerves and skin between the donor [arm] and recipient.” For the left side, the elbow joint was preserved, as were some of the nerves, so the team “transplanted the entire donor forearm muscles over his remaining tissues, then rerouted the nerves to the new muscle.” Because of the complexity involved in connecting all the tissues together, the team practiced on cadaver arms four times over a span of 18 months prior to the surgery. 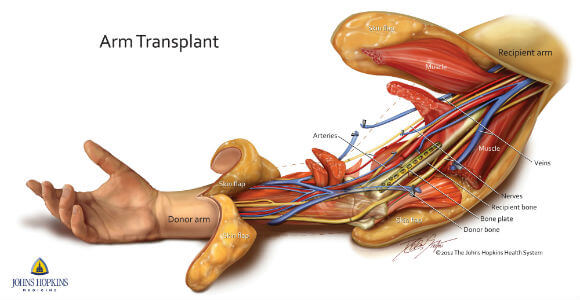 The risk of transplant rejection is high, so the Hopkins team employed an innovative approach of infusing Brendan with bone marrow cells harvested from the donor’s lower vertebrae. This allows him to take only some of the standard three-drug regiments used to prevent limb rejection, which is important because the anti-rejection drugs can compromise the immune system and damage organs. Since he is young, it was important that a shortened lifespan was not one of the consequences of receiving the double transplant.

Though the costs of the procedure and rehabilitation are being covered by the DOD’s Armed Forces Institute of Regenerative Medicine and John Hopkins, all the physicians involved volunteered their services.

At the press conference, Dr. Lee made it clear that though Brendan’s progress has exceeded their expectations, it will take many months to years before functionality returns. This is primarily because “nerves regenerate at the maximum speed of one inch per month.” To encourage nerve growth and development, Brendan will undergo six hours of physical therapy a day for the next two years.

In 2009, Sergeant Marrocco was driving an armored vehicle outside Baghdad when it was hit by a roadside bomb. He awoke at the Walter Reed Medical Center in Washington and found that all of his limbs had to be amputated, though he retained more of his left arm than his right. Though Brendan was the first soldier to survive as a quadruple amputee, he elected for the transplant surgery in order to be able to someday drive and get into athletics again, possibly even hand cycling a marathon.

Brendan now joins a growing list of patients worldwide to receive double arm transplants and becomes only the seventh to do so in the US. As doctors become more confident in the procedure and collaborate with various specialists, these double transplants will likely increase. A widely reported story last fall of a Texas woman who lost all of her limbs due to an invasive streptococcal infection (the flesh-eating bacteria) has been approved to also receive a double arm transplant, and was last known to be waiting for a donor.

Though the first reported double arm transplant was successfully performed in Germany in 2008, some limb transplants have been rejected. In 2010, a Turkish man received a quadruple limb transplant, but the limbs had to be removed after “metabolic complications.”

For more information, you can watch the press conference from ABC news: