If you’re a fan of Alpha Dog or the robotic cheetah from Boston Dynamics, then you already know that engineers have drawn lots of inspiration from land animals to create these robots. When it comes to the water, there’s plenty of robotic fish being developed along with unmanned underwater vehicles that can compete with dolphins in their anti-mine duties.

But what about a robot that can travel from the water to land and back to water again?

It’s a tough engineering problem that researchers at the EPFL Biorobotics Laboratory in Switzerland and the University of Bordeaux in France have spent years working on. Back in 2007, the group published an article in Science magazine announcing the development of a salamander-like bot with four legs and an actuated spine. Now, they unveiled the next generation of the amphibious robot dubbed Salamandra Robotica II. This new version is faster and more robust than the previous version, advances that came as the team pursued a better understanding of locomotion systems by comparison to animal movements.

Here’s a video of the robot that is pretty astounding:

The walking motion of the robot is produced by rotation of the limbs, but the swimming motion was more complicated to develop, requiring nonlinear oscillators.

The remote controlled robot can switch modes of movement simply by controlling the intensity of the signal down the spine of the bot. This isn’t an accident either. Professor Ijspeert and colleagues specifically designed the bot modeled after a salamander’s nervous system wiring, so that neural-like circuits extend through its ‘spinal cord.’ The signal passes from the origin of the signal or its brain down the length of the bot, producing a more biomimetic model of a salamander that translates into its motion.

Another interesting aspect of this robot is that the articulations follow a modular design, meaning that it can be made longer or shorter easily. Segmentation of robots is intriguing because large structures can be built up from simple components while increasing their functionality, much the way Legos and biological cells are used to make larger, more complex structures. In one video on the group’s site, a bot loses its tail and both still function then another bot splits into three pieces and each continue to operate normally. Because each has its own microcontroller, battery, and motors, the modules can be combined in a variety of ways to produce one or more functional bots or a damaged component can be easily swapped.

The Biorobotics Laboratory has also been hard at work on related robots, such as the amphibious Amphibot that mimics a snake or eel, which is similar to Salamandra Robotica II without the legs. Speaking of, the researchers are also looking at ways to make Salamandra Robotica II have articulated feet for better motion control.  And if you’re squeamish at all about giant centipedes, I’ve got some bad news for you…a modification of the bot may make them possible too: 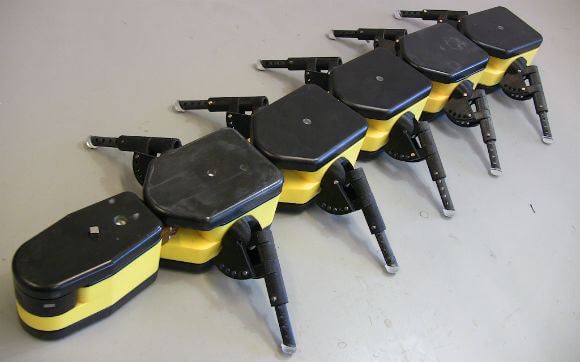 Clearly, these robots are geared for research purposes for now. In the near future, perhaps the bots can be used in search-and-rescue operations, as the researchers hope, but it’s not hard to see how this design could find use in the growing military robot ranks. Low-lying amphibious drones could be ideal to run some of the same kinds of stealthy, surveillance missions that amphibious units in the Navy and Marines currently do.

The lesson here is simple: if an animal does something cool, someone’s going to design a robot to do it too.