Last December, we visited two very cool companies at the intersection of high tech and art—Bot & Dolly and Autofuss. In an industrial space behind their café, Front, the companies use robotic arms, clever software, and cameras to produce multimedia experiences the likes of which you’ve never seen.

Well, they’re at it again. Bot & Dolly recently released a mind-blowing video titled, “Box.” The visuals alone are striking. But they’re much more impressive when you realize they weren’t done in post-production. Had you seen the sequence shot live, the view would look no different from the video.

So what have they done here? The crew attached two featureless flat panels to a pair of robotic arms. You might recognize the robots doing the choreography as the same pair dancing together in the video we took last winter. They’re repurposed from a Detroit assembly line and programmed using Bot & Dolly’s Maya-based robotics software platform, IRIS, to perform complicated sequences of motion with near perfect precision. 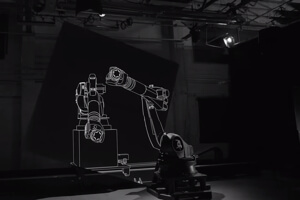 Because the arms and projector are both talking to that central bit of software, the computer always knows where in space the panels are and at what angle. This privileged bit of information allows software, projector, and arms to work together, manipulating the projection to give the illusion of all kinds of psychedelic 3D shapes and images.

Bot & Dolly says the new methodology could potentially “transform theatrical presentations, and define new genres of expression.” And it doesn’t take much to imagine the concept at a concert or show in Vegas.

But it’s also a good reminder that technology alone, that is the ability to do something new, isn’t enough. It always requires creative combinations and good design to unleash tech’s full potential. That’s why companies playing and experimenting at the edge of both art and tech, like Bot & Dolly, are important.

The result is beautiful, and suspending disbelief for a moment or two, it might as well be “indistinguishable from magic.” But it’s even better when the curtain is drawn back on the wizards at the end of the video—robots are awesome.