Every year, the media flocks to Apple’s WWDC to witness whatever magic Apple has up its sleeve. But this June, the first performer was a previously unknown startup, Anki, showing off their iPhone-controlled car racing game, an intriguing blend of consumer robotics and artificial intelligence.

We talked to Anki in June to learn about Anki Drive, five years in the making, but they kept many of the details under wraps. “Stay tuned,” they said.

Anki Drive is Mario Kart meets Hot Wheels; the progression and engagement of a video game paired with the tangibility and emotional connection of physical toys. Gamers control their car’s speed, virtual weapons, and special tools with an iPhone, while the system keeps the cars on track and steers a deadly AI competitor.

Palatucci and Tappeiner started by taking us on a tour of the Anki Drive box and all the goodies inside. The base kit ($199) includes two cars (Boson and Kourai) with charging and display cases (USB in the back), the track (rolled up), a tire cleaner (dirt can hinder performance), and a starter kit to take you through the basics. Two expansion cars (Rho and Katal) will be available separately for $69 each.

After unboxing the goods, Palatucci unrolled the track. He said in testing they discovered a rollable track was popular with parents—no surprise there—and it allows gamers to easily take Anki Drive over to a friend’s house. In fact, because communication happens automatically over Bluetooth, not WiFi, you can play anywhere you want, even in the park or at Grandma’s.

We turned the cars on, and they automatically started doing laps. In the visible spectrum, the track’s ink looks black, but under an infrared light carried by each car, it’s transparent and covered in printed codes. The cars use these codes to precisely determine location and, without any input from the iPhone, can autonomously circle flawlessly.

But to play the full game, you’ll need an iPhone and the free Anki app. From the app, gamers toggle their car’s speed with their left thumb, fire weapons or use tools with their right, and steer between lanes by tilting the phone. You can also choose a gameplay mode and use earned points to upgrade the cars.

We chose characters (Boson for me) and played in combat mode. I was able to reel Tappeiner in with the tractor beam (his car physically slowed) and knock him out with the pulse carbine weapon (the car stopped and went to the side of the track).

In the game, each time you use a weapon or get hit, the car loses a few bars of energy. You get points for each “kill,” and the first to five points wins. After our little warm up, we added the AI car at medium difficulty—and were annihilated in short order.

In many ways, Anki Drive lives up to its billing of a video game in the real world.

It’s fun and responsive. The cars have far more flexibility than your average toy car, and you can evolve them in the “garage” by spending points on upgrades. They have a speed limit out of the box, but you can up the top speed by 50% as you play. Better than a video game—you can trade or sell the cars with these custom abilities intact.

But of course, the scope of the game is still somewhat limited by real world rules—point of view, for example. In a video game you can switch between views so your directional buttons match your character’s direction of motion.

Granted, I only had ten minutes to practice, and Palatucci told me to think of “left” as “inside” and “right” as “outside.” Even so, my brain struggled a bit to steer as the car did laps—my left matched the car’s left going one way, a few seconds later they were opposite, then they’d switch back.

Also, while a video game has vast worlds to explore or tens of levels to test your skill—Anki is limited to the track you buy. Palatucci noted that releasing more tracks is one “obvious next step” for the firm. Even so, you’ll likely need to buy new tracks, and depending on your wallet, you may only end up with two or three options.

That said, Anki can easily evolve other aspects of the game by offering app updates with more weapons and special tools and by adding different gaming modes.

If it isn’t a full-blown video game in the real world—it’s the closest we’ve seen yet. And it wouldn’t have been possible even five years ago. 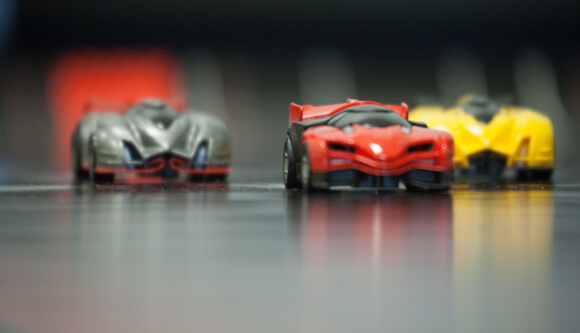 Tappeiner told us they worked on systems like Anki Drive at Carnegie Mellon, but the projects used expensive, meticulously calibrated equipment, like a $45,000 laser scanner or a $150,000 motion capture system—all that for a one-time demo.

“In our case, we needed to solve the same problems, but for a consumer product,” Tappeiner explained, “Which means it can cost only a couple dollars, and it needs to work hundreds of thousands of times every day in people’s homes, no matter what the conditions are.”

That kind of robust reliability is only now possible thanks to the rapidly increasing power and decreasing price of miniature chips and sensors. As Palatucci said, “We’re taking advantage of Moore’s Law.” He told us each car runs on a cheap 50 MHz microcontroller and 26,000 lines of code.

“We did the math and realized that the microcontroller in each of these cars is 100 times more powerful than the first IBM personal computer.”

Of course, each car’s processing abilities are paltry compared to a smartphone. If Anki Drive is a nervous system, the cars are the reflexes and the iPhone and app are the neocortex, making higher level decisions. Should the AI car pass another car? Shoot it? Block it? The app is capable of making hundreds or thousands such decisions a second.

Because the system’s “intelligence” is distributed between cars and smartphone and it runs on Bluetooth not WiFi, performance isn’t hindered by latency and connection. That is, if the cars weren’t somewhat autonomous, even a brief signal drop would send them flying off the track.

Who will buy and enjoy Anki Drive? During the beta program, they had a dad come in and play with his eight year old son and eighty year old grandpa. Said another way, Anki hopes the game finds its market in car lovers and gamers, young and old.

Palatucci told us, “We see a big opportunity in entertainment. Traditional, physical games and toys are these static things, and we want to bring them to life.”

But in the future, there may be other applications, beyond gaming, for Anki’s AI platform and others like it. True robotics and AI is just now beginning to be made available for consumers. The coming years may bring intelligent  products and infrastructure that adapt to humans and automatically perform tasks without being asked.

In a recent blog post, Anki co-founder and CEO, Boris Sofman, said, “We’re at the earliest stages of a technological revolution that could reinvent countless aspects of our daily lives. This is why, for us, Anki Drive is not just a proud first step for the company, it’s a catalyst for the future of Anki and the industry of consumer robotics.”