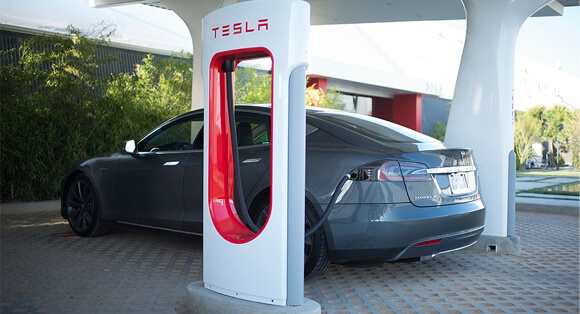 You can travel anywhere in the US and never be further than a tank of gas from the next gas station. Tesla Motors wants the same freedom for electric cars, and they can’t afford to wait for someone else to make it happen. So, they’re building their own charging networks in the US, Canada, and Europe.

Owners of a Tesla electric car can now travel from San Diego to Vancouver, British Columbia and the major hubs in between using only Tesla’s own “supercharger” stations. The company said in a press release that 99% of Californians and 87% of owners in Washington and Oregon are now within 200 miles of a station.

Tesla Model S owners with an 85 kWh battery can charge their car for free, and for a couple thousand dollars, owners of the 60 kWh battery can do the same. Folks may buy a Tesla to be green or sexy (or both), but the bottom line matters too. Tesla wants people to feel they’re getting a better deal with an electric car than a gas-powered car. (And, the firm says, “We want to encourage Model S owners to take road trips.”)

The West Coast connection is but the first link of the chain. Tesla plans to join East and West this winter, when Tesla founder and CEO, Elon Musk will go cross-country in a Tesla Model S with his kids. By 2015, the firm hopes to have filled in the middle of a nationwide charging network.

Even so, charging time is still a sticking point. With the latest superchargers, Tesla’s stations deliver a 50% charge in 20 minutes; the recommended 80% charge (more than enough to travel between stations, Tesla says) takes 40 minutes; and a full charge takes 75 minutes. Of course, they spin this—you have time for a “quick” bathroom break or meal (their stations are typically near such amenities).

But the longer you’re on the road, the more those 20- or 40-minute stops add up. Musk estimates he’ll spend “only” nine hours charging on his 3,200-mile, cross-country odyssey. But let’s not kid ourselves. That’s significant.

If he were driving a hybrid Toyota Highlander—433 miles per tank and room for Musk and his five sons—he’d need just eight stops and, assuming roughly five minutes to fill up, 40 or so total minutes of refueling.

Tesla knows they need to charge their cars faster, and earlier this year they offered one possible solution. At a Tesla PR event, Musk revealed a plan to swap depleted batteries for fresh ones at Tesla charging stations. At the event, the firm swapped out two Tesla batteries in less time than it took to refuel an Audi at a gas station.

Whereas owners are able to charge batteries for free, they’d pay a fee to swap them. Musk said it’s a simple choice, “Do you prefer faster or free?” He estimated the cost would be somewhere around the price of 15 gallons of gas ($60 to $80) when the firm begins rolling out the technology this winter.

Of course, battery swaps and superchargers would be Tesla-only technology. If you own a different electric car, you’re out of luck. Swaps may also limit any perceived economic advantage to going electric. And tracking warranties and the relative age of constantly shifting batteries is possible but not the simplest process.

The best universal solution may still lie in direct improvements to battery technology.

In a recent short film, UCLA’s Ric Kaner described the promise of non-toxic, graphene supercapacitors that could store energy and charge 100 to 1,000 times faster than a traditional battery. Kaner said, “You’d pull into a charging station, and within a minute, it would charge up your car.” However, exciting as they are, such technologies are years away.

Until then, logistical challenges remain. As Musk has said, “I think it’s important for us to address the reasons people are not buying electric cars. People need to feel they have the same level of freedom they have with gasoline cars.” Tesla is chipping away at the problem, but no silver bullet has yet presented itself.