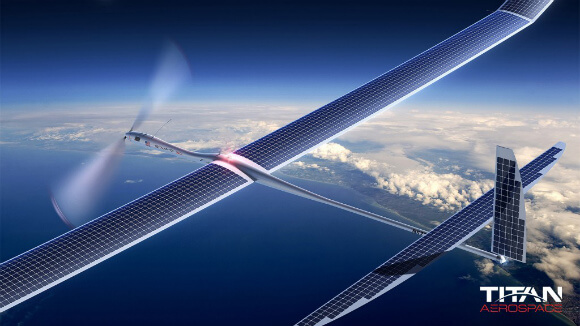 Such a fleet could image everything, all the time, everywhere, at high-resolution. They could also provide low-cost communications — effectively cellphone towers 60,000 feet tall.

This vision of the future, is why both Google and Facebook are fighting to buy the technology.

Recently, Google (outbid Facebook and) purchased Titan Aerospace — a drone company — for $60M. Titan makes solar-powered drones, which are capable of beaming Internet to parts of the world that are not yet connected. This purchase was announced on the heels of Facebook’s acquisition of competing drone company Ascenta for $20M.

As we’ve discussed at Abundance 360, there are two key trends emerging:

(1) Global Connectivity: We are heading from a world of 2 billion connected to the internet (in 2010) to at least 5 billion by 2020. But this drone technology, perhaps in combination with Google’s stratospheric balloons (called Project Loon) has the potential to take it to 7 billion by 2020.

This is perhaps one reason why, in April 2013, Google Executive Chairman Eric Schmidt made the surprising pronouncement that, “by the end of the decade (2020), everyone on Earth will be connected to the Internet.” This addition of another 3 billion to 5 billion new consumers on Earth is HUGE. If these people are not your customers, then they are your customer’s customers. They represent tens of trillions of dollars of new economic buying power entering the global economy. Don’t ignore this. This is a huge opportunity.

(2) Perfect Knowledge — Know Anything, Anytime, Anywhere: Also at Abundance 360, I described where we’re heading with the explosion of a trillion sensors, drones, private orbital constellations, Google Glass, etc… basically everything, everywhere will be constantly imaged. How does the ability to follow your competition’s supply chain via video change your landscape? How would you data mine all of the available images?

Where else can autonomous high and low-altitude drones cause disruption beside with Internet access and global imaging? I discuss these answers with the members of the A360 community throughout the year and in person every January at the Abundance 360 Summit.

Hope this insight about the future is useful to you.