For all you ping pong balls out there, get ready to take a tour of San Francisco that will blow your fictional minds. Since 1974 Scott Weaver has been working on his masterpiece, Rolling Through the Bay: an artistic recreation of his hometown that features four rolling tracks for ping pong balls, each taking you down a different path through the city. The Golden Gate Bridge, the Transamerica Pyramid, Haight-Ashbury, Coit Tower, etc. – all the major landmarks of San Francisco are represented. The most amazing part of this ping pong roller coaster isn’t the more than 3000 hours Weaver spent in its creation, nor the intense details shown in the 9 foot by 7 foot by 30 inch model. No, what is truly eye-popping is that Weaver built this moving sculpture entirely out of toothpicks, more than 100,000 in all, collected from nations all over the world. Don’t miss the amazing video demonstration of Rolling Through the Bay below, followed by a short clip where Weaver discusses his construction techniques. A sculpture built from 100,000 toothpicks…and to think that all this time I’ve been using these things to clean my teeth!

I know that Singularity Hub doesn’t usually cover art projects like this but sometimes the coolest technologies are the oldest ones. Besides, Rolling Through the Bay is freakin’ awesome! Not only does it show how individuals dedicated to their hobbies can produce creations on par with any professional endeavor, it’s a moving tribute to Weaver’s love for San Francisco – a city which has housed his family for generations.  As a fellow resident of this foggy metropolis I’m impressed with how many different landmarks he was able to include. Four distinct paths through major landmarks, each with its own theme and construction style. How can you not love this?

The details in Weaver’s construction are jaw-dropping, but even more so when you consider the invisible choices he made to make Rolling Through the Bay more authentic. The models of Japanese trees are made from Japanese toothpicks! Watch Weaver discuss more about his toothpick choices as well as demonstrate some of his construction techniques (he only uses Elmer’s glue) in the video below.

Rolling Through the Bay is now on display at the Tinkering Studios in the Exploratorium in San Francisco and will be shown through June 19th. Photos of individual components of the larger structure can be seen on Weaver’s website, along with a more detailed description of the artist’s roots in the city. Tinkering Studios and the Exploratorium are wonderful institutions aimed at engaging the imaginations and thoughtful problem solving of youth in the Bay Area (and around the world). They are among the best in finding entertaining ways to teach kids about science and engineering and Rolling Through the Bay is a great example of the projects they regularly have on display. As our internet enabled culture continues to expand I can’t wait to see what other creative secret projects it brings to light. Whether it’s a real world robot model of R2D2, a factory made out of Lego, or something equally awe-inspiring you can bet we’ll cover it here on the Hub. 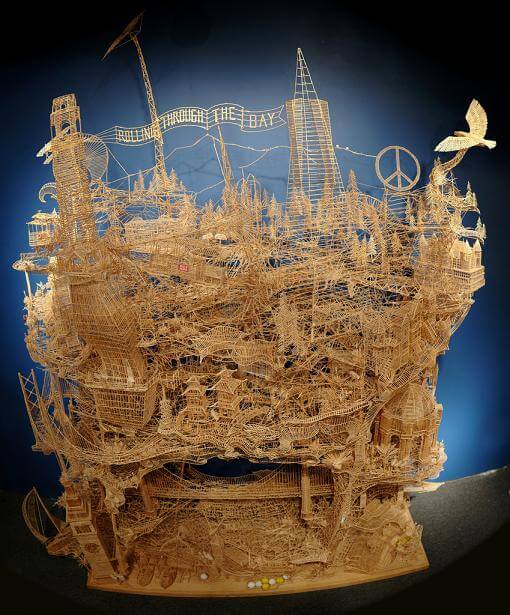