Macular degeneration had left Sue Freeman, 78, legally blind. She couldn’t go for a walk by herself, she couldn’t go shopping or even cook by herself. Another woman, age 51, was suffering from Stargardt’s macular dystrophy, which causes the loss of cells located in the pigmented layer of the retina called the retinal pigment epithelium. Also legally blind, she was unable read the large letters on an eye chart used to test people with compromised vision.

In July of 2010 doctors injected retinal cells derived from human embryonic stem cells into one eye of each woman in the hopes that they would regrow the cells needed to see. A couple weeks after surgery Freeman improved her visual acuity score from correctly identifying 21 letters (20/500 vision) to 28 letters (20/320). She could once again pour a glass of water without spilling it, read her own handwriting, and – to the chagrin of her husband – take notice of all the improvements that needed to be done on rental properties that they own.

The other patient, who wishes to remain anonymous, could only detect hand motions prior to surgery. Two weeks following surgery she began counting fingers. She also improved from identifying zero letters on the acuity chart to correctly recognizing five. She woke up one morning and looked at the armoire in her bedroom. “It has a lot of detailed carvings and I thought wow, I was missing those before,” she told CNN. 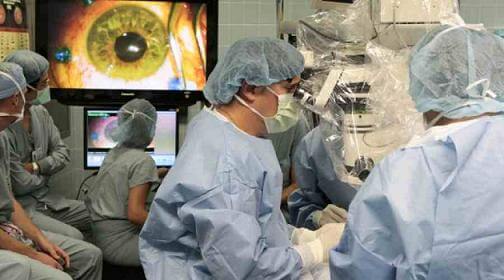 Both patients continued to show improvement in the treated eye four months after surgery and did not show any adverse side effects. Importantly, the eyes that did not receive stem cells did not show improvement. The patients were also given immunosuppressants to prevent their bodies from rejecting the foreign tissue.

The trial was led by Steven Schwartz, an opthalmologist and chief of the retina division at UCLA’s Jules Stein Eye Institute, and the results were published in The Lancet. Although the results are extremely promising, Dr. Schwartz is quick to temper enthusiasm over the trial. Only two patients were treated, after all. Many more will need to be successfully treated before the procedure can be accepted as a robust option. He justified publishing the study after only two patients given the amount of interest in the field. Qualifying the study further, Dr. Schwartz cautioned that the improvement in eyesight for one of the women could be a placebo effect.

The stem cells were treated before being injected into the patients’ eyes. Researchers at the company that had provided the stem cells, Advanced Cell Technology, had induced the cells to become retinal pigment epithelial cells. The procedure, which included the injection of about 50,000 cells, took half an hour. The team received stem cells from Advanced Cell Technology, which had gotten them from an embryo stored at a fertility clinic. The couple who’d produced the embryo decided not to use it and then donated it to the company. After stem cells were derived from the embryo it was destroyed. The hope is that in the future stem cells will be taken from embryos without the need to destroy them.

The stem cell treatment gives new hope to the blind. Macular degeneration is the leading cause of vision loss among the elderly. When the light-sensitive photoreceptors of the macula degenerate people can no longer bring objects into focus. Stargart’s muscular dystrophy, or Stargart’s disease, is a common cause of vision loss among children and young people. Right now there is no treatment for Stargart’s disease, and while drug injections, laser treatment and diet alteration can slow the progression of age-related macular degeneration, it is also considered incurable.

Others are working towards a stem cell cure for macular degeneration. In 2010 researchers successfully grew a retina in the lab from human embryonic stem cells. It was the first time a 3D tissue was produced from stem cells. Curing macular degeneration is an ideal target for stem cell treatments. The number of cells needed is low compared to, say, regrowing the neurons of a damaged spinal cord. Unlike other cells in the retina, cells of the retinal pigment epithelium don’t need to form synapses to work. Lastly, the retina’s immune environment is more tolerant, thus decreasing the need for immunosuppressants.

Pharmaceutical giant Geron Corporation used to represent one of the best chances for making stem cell treatments a reality. But recently after the company had begun human trials on their promising cell line that allowed paralyzed mice to walk again, they dropped out of the stem cell game altogether. If the UCLA trial results hold, it could entice more companies like Advanced Cell Technology to invest in stem cell research. According to a commentary on the trial, when Geron ended their trial it left ACT and Dr. Schwartz and his colleagues as the sole group treating patients with embryo-derived stem cells. That’s not good enough. Let’s hope the trial not only brings the world into focus for its patients, but also brings the potential of embryo-derived stem cells back into the focus of medicine.

One CRISPR Treatment Lowered Cholesterol in Monkeys by 60 Percent