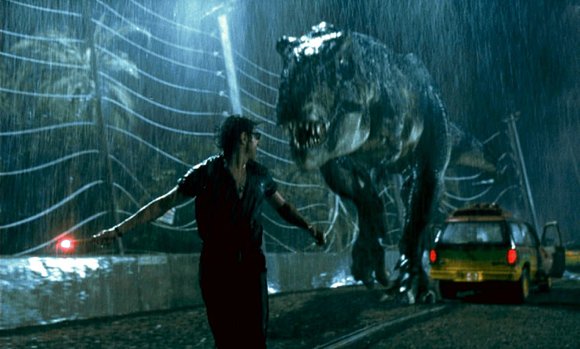 A new study that estimates the rate of DNA degradation in fossils casts serious doubt on our chances of ever having a real life Jurassic Park. The researchers looked at DNA extracted from the bones of an extinct bird between 600 and 8,000 years old and calculated the rate at which the fossilized DNA degraded. They concluded that, even under the best conditions, a DNA molecule wouldn’t survive past 7 million years, making us just shy of 60 million years too late in resurrecting T. Rex.

Previous reports of dinosaur DNA lasting tens of million of years have been met with skepticism. Many of these samples were found to contain more recent DNA mixed in with the life blueprints of long extinct species. But without a true reference – like the entire sequence of T. Rex’s DNA – scientists have been left to denounce or defend authenticity without definitive resolution. What was needed was a kind of general rule that set the limits on just how long a fossilized DNA molecule could remain intact. Now, apparently, palaeogeneticists at the University of Copenhagen and Murdoch University in Perth, Australia, have what it takes to put the question of DNA degradation to rest.

The team used 158 leg bones belonging to three different species of moa, giant birds native to New Zealand who were driven to extinction around 1,400 AD from over hunting. The bones, between 600 and 8,000 years old, had been collected from three sites within 5 km of each other. The proximity of the samples is important as it means that the fossils experienced very similar conditions during their incubation to enlightenment.

By comparing the amount of degradation in material of different ages, the researchers calculated that the DNA had a half-life of 521 years. If their figure is correct it means that in just 521 years half of the DNA in a sample would have degraded, another half in another 521 years, and so on. Bottom line: even under the best conditions, which the researchers say is at –5 °C, virtually all of the DNA would be gone in 6.8 million years. There’s still hope for the woolly mammoth, still romping the Earth until about 1700 BC, but as dinosaurs expired about 65 million years ago, it seems as though the closest we’re going to get to T. Rex is in a museum.

Different conditions, as I mentioned, can change the rate of degradation. When a cell dies its DNA is broken down by several processes including enzymes that snap its nucleotide backbone. Microbial attacks and oxygenation also destroy DNA. The most powerful degrading force over long periods of time, however, is thought to be water. The chemical bonds that hold DNA together will at some point react with water molecules and disintegrate. The mao samples examined in the current study were preserved at a balmy 13.1 °C. Scientists have yet to look at samples from frozen ares where these processes are kept more at bay, to see if the DNA degradation rate is similar or, we can only hope, much slower.

And, try as they might, the mao sample conditions were only similar to conclude that aging accounted for just 38.6 percent of the DNA degradation – over 60 percent was due to other factors. Because of this, some researchers aren’t quite ready to throw in the cloning towel. “Other factors that impact on DNA preservation are clearly at work,” Michael Knapp, a palaeogeneticist at the University of Otago in Dunedin, New Zealand, told Nature. “Storage following excavation, soil chemistry and even the time of year when the animal died are all likely contributing factors that will need looking into.”

But even if the researchers are off, they would have to be off by a factor of ten for there to be any hope that dinosaur DNA could survive 65 million years in any kind of water-containing environment. What about amber? To date, amber has yielded a few ancient species. There have in fact been several insects so encapsulated that actually lived during the age of dinosaurs. Sadly, it seems as though amber is not the preservation marvel that might serve as a molecular time machine. Thus far attempts at recovering DNA from insects trapped in amber have yielded a few, spare fragments of DNA. But as Knapp noted above, more studies still need to be performed. Until the permafrost studies are carried out, I suppose we can still hold out hope for our Jurassic Park. Maybe fact will turn out to be stranger than fiction.