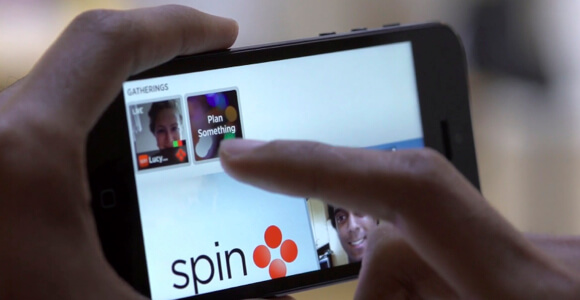 Remember in Back to the Future II when Marty gets berated by his boss on that giant video monitor in his living room? That was supposed to be 2015. Televisions are bigger, and we do have video conference apps, but most of us prefer sparsely worded texts over either video or phone. (Hollywood can’t get it right all the time.)

So, why don’t we use video more? Unless it’s a special communication—say, someone’s birthday or a long overdue catch-up call with a parent—many of us prefer convenience over connection. But there also isn’t a killer video app yet.

Skype is buggy and user unfriendly. Facetime is pretty good, but everyone has to have an Apple device. There’s no special device with Google Hangouts, but you have to have a Google account. Although Google allows up to 10 people to chat free, Skype requires a premium account for conference, and Facetime hosts only one-on-one interactions.

None of the above make great use of touchscreens nor do they allow participants to share images or video while chatting—which is where the new video conference app, Spin, comes in. Spin hopes to fill a few holes in video chat.

Spin is free and doesn’t require a membership, although for now, it’s only available on iOS. It incorporates touch, allowing you to drag in photos, videos, and new participants. And you can draw shapes, symbols, or mustaches on whatever photos you’re sharing. Spin allows video conferencing with up to 10 people.

I tried it out with my brother on our iPhones. We chatted and shared pictures and YouTube videos. The call was seamless on WiFi but too glitchy to use on cellular (LTE). We were able to switch between the two, outside the app, without losing the call.

Once you’ve set up your contacts, you can pretty easily bring more people in (though it took us a second to figure out how). The more you bring in, the smaller their windows get, so, the extra real estate on an iPad would be preferable for multi-person chats.

Overall, Spin is a cool app, and I could see myself using it more. The touch interface is interesting and mostly intuitive. Like anything, it takes a few minutes to orient yourself.

But Spin’s most intriguing trait is the common experience it provides. It’s more fun watching YouTube with your friends across the country (US only for now), seeing their faces, and hearing them laugh or comment.

I’d even say Spin stops too soon. It’d be useful to share more.

I often video chat with my editor, and he points out an article relevant to our conversation. First, he toggles windows to shoot me the link. Then I toggle windows to check it out. Ideally, all this would happen in the same window, and I can read the article while we’re talking about it or more easily reference a particular line.

Perhaps Spin, or something like it, will incorporate even more content—spreadsheets, documents, web browsers, streaming films from Amazon or Hulu.

Or maybe we’ll opt for something beyond video. Second Life’s Philip Rosedale and his new company, High Fidelity, are creating a next-generation virtual world. Might we one day prefer 3D virtual meet-ups (once they’re more immersive) to 2D video?

The virtual worlds of tomorrow may be orders of magnitude richer than today’s creations. Avatars will track head and body movements, and we may interact by way of more immersive interfaces, like virtual reality headsets.

Any number of participants can enter a virtual room, talk, manipulate objects, and have the whole digital experience at their fingertips to play with and share.

That said, no matter how good avatars and virtual worlds get, there’s no substitute for seeing your best friend, brother, mom, dad, or nephew live. And while there are some refinements to be made—the current technology is a vast improvement on 1985.