Worried about leaving a digital footprint behind? Your bacterial footprint could be much worse and even incriminating.

Recently, researchers traced the microbes that live on and around people within their homes. Findings from the study showed that the composition of indoor microbe communities is significantly affected by people and changes rapidly with their presence or absence.

For example, after three of the families moved into new homes, it took less than 24 hours for the microbes to spread, to the extent that the new home looked microbially the same as the previous home. One of the couples who moved had been staying in a hotel–their new home was rapidly populated with the microbes from the hotel room.

The results serve as another insight into a complex relationship between humans and the bacteria that live in, on, and around us.

“We want to know where these bacteria come from,” said microbiologist Jack Gilbert, who led the study at Argonne National Labs as part of the Home Microbiome Project, in the press release. “As people spend more and more time indoors, we wanted to map out the microbes that live in our homes and the likelihood that they will settle on us.”

The research, recently published in the journal Science, was conducted over the course of six weeks. Participants included 18 people within 7 diverse American families that were recruited on Twitter for the study. There were even three dogs and one cat in the mix.

Participants swabbed their hands, feet, and noses daily as well as various surfaces in their dwellings, such as light switches, doorknobs, countertops, and floors. The samples were then sent to Argonne for DNA analysis. The composition of bacteria was most similar on hands, given the number of common surfaces people share, while noses showed more unique compositions. Furthermore, closer relationships showed more microbe sharing–whether between couples or even parents and their young children.

In one instance, bacteria called Enterobacter (known to infect immunocompromised individuals) was traced passing from one person’s hand to a countertop then to another person’s hands. The researchers commented that though we may be exposed to pathogens routinely, disease may only result when the immune system is disrupted in some way.

Mounting evidence suggests that the human-microbiome relationship may affect physical and mental health, such as obesity, along with development. In one recent study, gut bacteria from thin and obese mice can induce weight loss or gain in normal mice.

“We know that certain bacteria can make it easier for mice to put on weight, for example, and that others influence brain development in young mice,” Gilbert said. “They are essential for us to understand our health in the 21st century.” 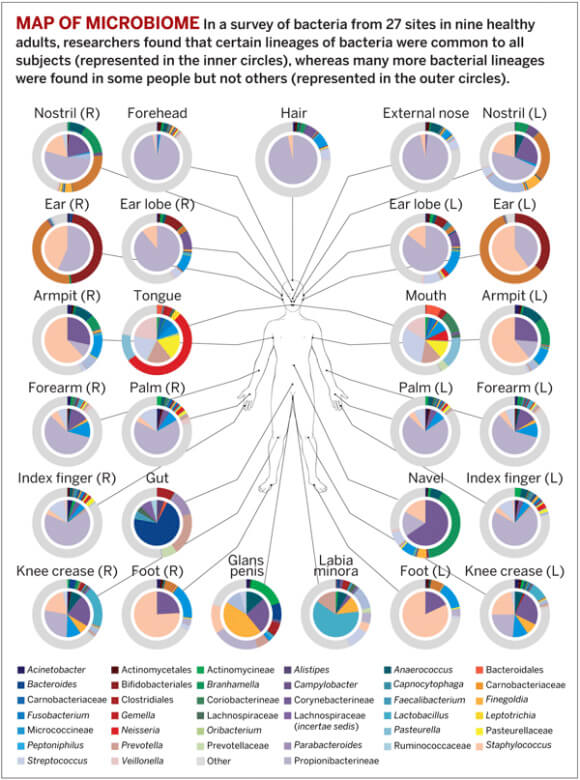 Unravelling the mystery of the human microbiome will take some time due to the complexity of the composition. One startup called uBiome recently raised $4.5M from investors to sequence the human microbiome after bringing in $350,000 via a crowdfunding campaign in 2012. Scientists recently reported that 10 million genes of the microbiome have now been sequenced.

Along with considering the health implications of these findings, the researchers noted that our microbiomes were characteristic, meaning that the microbial composition is enough to identify at least the family that left it behind. Hence, microbiome analysis could be helpful in forensics. Because the microbial community changes after a person leaves a house, “You could theoretically predict whether a person has lived in this location, and how recently, with very good accuracy,” Gilbert said.

Though it will take a number of years for the microbiome to be understood, the implications of this research are deep. With all the attention in the world of technology on data to understand everything about humans, it may be the tiniest of living things that speak volumes.