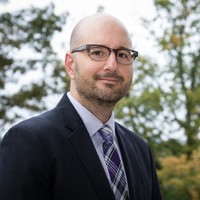 Costa Samaras is an associate professor in the Department of Civil and Environmental Engineering at Carnegie Mellon University. He directs the Center for Engineering and Resilience for Climate Adaptation and his research spans energy, climate change, automation, and defense analysis.

Samaras analyzes how energy technology and infrastructure system designs affect energy use and national security, resiliency to climate change impacts, and life cycle environmental externalities. He is an affiliated faculty member in Carnegie Mellon's Scott Institute for Energy Innovation, the College of Engineering's Energy Science, Technology and Policy Program, and by courtesy, a faculty member in the H. John Heinz III College.

Samaras is also an Adjunct Senior Researcher at the RAND Corporation and a professor at the Pardee RAND Graduate School. He served on a National Academies Committee evaluating the Department of Energy's advanced transportation energy research portfolio, serves on the Transportation Research Board's Energy Committee and the Alternative Transportation Fuels and Technologies Committee, is an Associate Editor of the journal Renewable and Sustainable Energy Reviews, and serves on the American Society of Civil Engineers Committee on Adaptation to a Changing Climate. He has published numerous studies examining electric and autonomous vehicles, renewable electricity, transitions in the energy sector, conventional and low-carbon fuels, and was one of the Lead Author contributors to the Global Energy Assessment.

Samaras has also led analyses on energy security, strategic basing, and infrastructure issues faced by the Department of Defense. He has presented his research to senior appointed governmental leaders, former Cabinet Secretaries, senior federal and military decisionmakers, Congress Members and professional staff, and the leadership of major utilities, automotive companies and technology firms.

From 2009 to 2014 Samaras was a RAND Corporation researcher, most recently as a Senior Engineer. From 2008 to 2009 he was a post-doctoral fellow in the Climate Decision-making Center at Carnegie Mellon, working on electric transportation and low-carbon technology policy. From 1999 to 2004 he was an engineer working on several multibillion-dollar infrastructure megaprojects in New York, including the extension of the Number 7 Subway Line in Manhattan, and also worked on the rebuilding of the Subway Line underneath of the World Trade Center after the attacks of September 11, 2001.

Bargain-Hunting Robocars Could Spell the End for Downtown Parking

Corey HarperConstantine Samaras - August 30, 2019
Imagine a scene from the near future: you get dropped off downtown by a driverless car. You slam the door and head into your office or appointment. But then where does the autonomous vehicle...
Read more