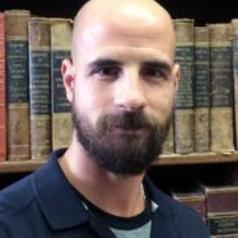 Javier Ortega-Hernandez is an invertebrate paleobiologist interested in the evolution of major animal groups during the Paleozoic, with particular emphasis on the Cambrian Explosion and the Great Ordovician Biodiversification Event. Originally from Mexico City, he obtained his undergraduate degree in Biology from the Universidad Nacional Autónoma de México, and in 2008 completed an MSc in Paleobiology at the University of Bristol in the United Kingdom. He then moved to the University of Cambridge from 2009 to 2018, first as a PhD student at the Department of Earth Sciences and then as a research fellow of Emmanuel College and the Department of Zoology. He has been faculty at the Department of Organismic and Evolutionary Biology and curator at the Museum of Comparative Zoology at Harvard University since January 2019.

The main goal of my research is to better understand the substantial extinct biodiversity of invertebrate metazoans that first appeared and rapidly diversified during the Paleozoic Era, the period of time comprising between 541 and 251 million years ago. Most of our current work focuses on the study of several Lower Paleozoic sites of exceptional preservation around the world. These remarkable fossiliferous deposits contain critical information on the morphology and organization of soft-bodied organisms, including details of the internal anatomy, which are otherwise dramatically underrepresented in the rock record. Our group has a strong interest in the origin and subsequent radiation of Ecdysozoa (moulting animals) during the Cambrian Explosion and the Great Ordovician Biodiversification Event, with emphasis on the morphology, phylogeny and development of extinct panarthropods – whose extant representatives include euarthropods, tardigrades and onychophorans. To this end, we combine traditional paleontological approaches with cutting edge techniques to obtain new morphological information from the fossils, test macroevolutionary hypotheses through deep time, and ultimately clarify the origin of the major animal groups that have shaped the biosphere for more than 500 million years.

John PatersonGreg EdgecombeJavier Ortega-HernandezRobert GainesRussell Dean Christopher Bicknell - July 30, 2021
Charles Darwin famously discussed the “imperfections” of the geological record in his book On the Origin of Species. He correctly pointed out that unless conditions are just right, it’s unlikely for organisms to be...
Read more