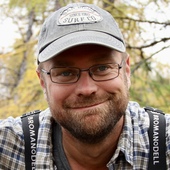 Love is a professor in evolutionary genetics at Stockholm University's Centre for Palaeogenetics. His general research interests are focused on the use of DNA technology to investigate the ecology and evolution of different species and how past environmental changes have determined the distribution and abundance of organisms.

At present, the work his group is doing in Stockholm is aimed at investigating how genetic variation, population structure and population size have changed over time, especially in the context of changes in climate during the Late Pleistocene (i.e., the last ice age). They are currently working on several projects on different wild animals, for example lemmings, mammoths, rhinos, and cave lions.

David Díez-del-MolinoLove Dalén - Feb 21, 2021
Most people think of mammoths as the iconic woolly species from the last ice age, which ended around 12,000 years ago. But mammoths originated in Africa around five million years ago, then spread and...
Read more