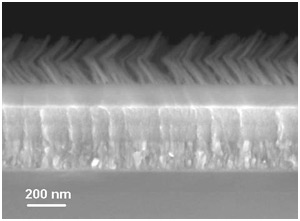 A huge leap has been made in the creation of high efficiency, cost effective solar power with the announcement of the world’s first material that absorbs the entire spectrum of sunlight (UV, visible, and infrared) from virtually any angle with near 100% efficiency.  This nano material from researchers at Rensselaer Polytechnic Institute drastically improves the efficiency of solar panels by allowing them to capture nearly all of the sunlight that hits them.  Current solar panels only capture about 70% of incoming light that hits them (the other 30% bounces off) but when coated with Rensselaer’s new material solar panels were shown to capture 96.21 percent of incoming sunlight.   (image credit: Credit: Rensselaer/Shawn Lin)

There is easily enough solar energy coming from the sun to provide all of man’s current energy needs, but today’s solar panels are inefficient at capturing and then converting this sunlight into energy.  The new material from Rensselaer takes us a huge step forward by solving the problem of sunlight capture, but conversion of this captured sunlight into usable energy still needs improvement.  As we continue to improve solar panel efficiency and cost, solar energy has the potential to replace fossil fuel based energy use and solve a large portion of the global warming epidemic.

A similar material from Rensselaer was first announced nearly a year ago, but the big news today is publication of the results of a year long study in which the material was taken out of the lab and used to drastically improve the absorption of light on a solar panel, proving that the material can be used for real world applications.

Not only is this material excellent at absorbing the entire spectrum of sunlight, but also notable is its ability to absorb the light from any angle.  This means that solar panels will no longer need to “follow” the sun during the day on motorized platforms to achieve maximum sunlight absorption.  This will save energy needs, decrease the complexity, and minimize the maintenance requirements of solar panels.

A few choice excerpts from the articles:

The technique allows the researchers to strongly reduce or even eliminate reflection at all wavelengths and incoming angles of light, Schubert said. Conventional anti-reflection coatings, although widely used, work only at a single wavelength and when the light source is positioned directly perpendicular to the material.

The seven layers, each with a height of 50 nanometers to 100 nanometers, are made up of silicon dioxide and titanium dioxide nanorods positioned at an oblique angle — each layer looks and functions similar to a dense forest where sunlight is “captured” between the trees. The nanorods were attached to a silicon substrate via chemical vapor disposition, and Lin said the new coating can be affixed to nearly any photovoltaic materials for use in solar cells, including III-V multi-junction and cadmium telluride.

Below are two cool images from the publications: 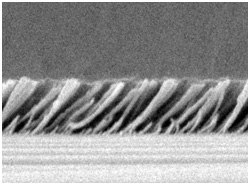 Above: To achieve a very low refractive index, silica nanorods are deposited at an angle of precisely 45 degrees on top of a thin film of aluminum nitride.Credit: Rensselaer/Fred Schubert

Above: From top, light reflecting off surfaces made from aluminum, silicon, and aluminum nitride. At bottom is a piece of aluminum nitride coated with the new anti-reflection material.Credit: Rensselaer/Fred Schubert