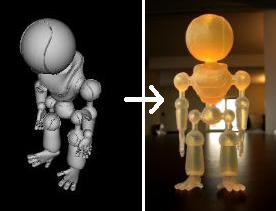 You know that replicator from Star Trek that was able to make food and other items seemingly out of thin air?  Well, such a device does not disobey the laws of physics and is theoretically possible.  Atoms are the fundamental building blocks of everything around us and replicating any object on demand simply requires its fabrication one atom at a time.

A company called Shapeways allows you to upload a 3D design to their website and then days later they will mail you a real life fabrication of your design.  Shapeways offers a cool service that has previously been expensive and hard to find for the average consumer.  More notably, Shapeways is an example of the merger between the physical world and the digital world that is underway.

Today the physical world and the digital world are completely separate realms, but this will likely change in the future.  One day it may be possible to take a person and convert them completely into digital form with no further need for their physical body.  Conversely, it may be possible for an artificial intelligence entirely created through software and digital bits to be transferred into physical form.  This will sound crazy to many readers, yet substantial theoretical work dubbed “it from bits” suggests that physical objects and digital objects are both the same thing – information.  The Center for Bits and Atoms, lead by Neil Gershenfeld is doing some very exciting work in this field.

Star Trek style replication is still likely a far off achievement for us, but companies like Shapeways are examples of the tiny steps we are making in what may be a steady march towards a unification of the physical and digital worlds.  One day you might in essence email somebody a real physical object, such as food or a car.  The email would contain the digital recipe describing the entire information content of the object (its atoms, the location of the atoms, the interconnection of atoms, etc.) and some sort of logic at the other end would convert this digital recipe into the real world physical object.  If you still don’t believe it, then remind yourself that only 3 billion base pairs of information called DNA is what was needed to make you!