The New York Times today reports on an awesome experiment in which thoughts were extracted from a monkey in the US and used to control a walking robot in Japan.  An electrode array implanted into the monkey’s brain was able to monitor roughly 300 neurons in the monkey’s brain that are correlated with the motor signals that cause the monkey to walk.  While the monkey was walking, the signals from these neurons were translated by software and relayed to the robot in Japan, causing the robot to walk.

This experiment was carried out by Dr. Miguel A. L. Nicolelis, a neuroscientist at Duke University whose work includes our previous post about a similar experiment in which a monkey controlled robotic arms through a brain implant.  Experiments like these are just the beginning of the burgeoning field of brain computer interfaces (BCI).  In the not to distant future we will be tapping directly into the thoughts and memories that are currently trapped within our brains.

Below is a video of the experiment, followed by a diagram from the NYT article: 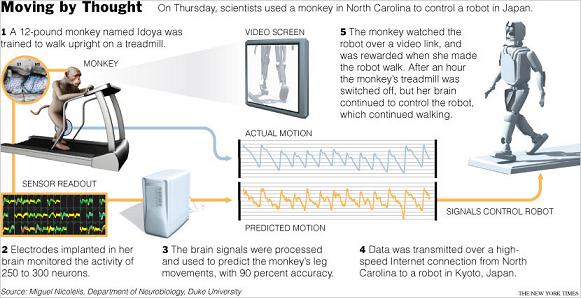