If you are at all interested in artificial intelligence and understanding how the human brain works then following the work of Jeff Hawkins (pictured right: source) is an excellent place to start.  Jeff Hawkins, founder of Palm Computing and Handspring, was the visionary that spawned the development of the palm pilot, the treo, and the grafiti writing language.  Although hugely successful in the field of mobile computing, Hawkins’ lifelong passion and current efforts focus entirely on creating a complete theory and reproduction of human level intelligence.

Today at the Hub we present a “spotlight on Jeff Hawkins” post in which we will familiarize you with his work and highlight some material for exploring what it will take to truly recreate human intelligence.

At the very core of Hawkins’ work is a theory that human intelligence can be defined as the ability to see patterns and predict outcomes based on previous experiences.  Our brains build a model of the world from our experiences and based on this model we are able to make theories and predictions about the future. In essence the brain is a prediction machine. More on this later in the post, but first a must see video of Jeff Hawkins presenting his ideas at the TED conference in 2003:

In this post we will focus on three elements of Jeff Hawkins’ journey to help mankind unlock the secrets of human intelligence:

1.  His book, On Intelligence

2.  The Redwood Center for Theoretical Neuroscience that he founded to promote brain research

3.  Numenta, the for profit company he created to commercialize his breakthroughs in reproducing intelligence 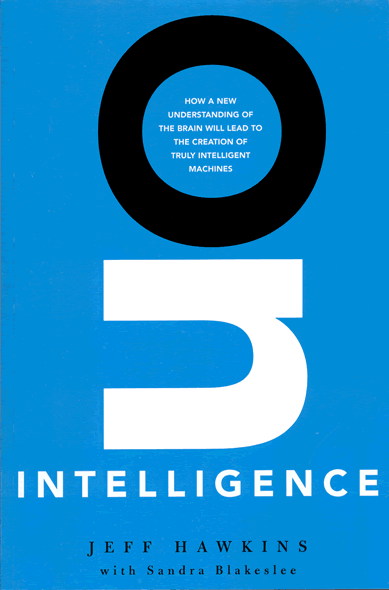 Hawkins’ book On Intelligence, pictured on the right, is hailed by many as a landmark work in the field of brain and intelligence theory.  One of the greatest achievements of this book is that it is written so clearly that regular people with virtually no background in neuroscience can understand and enjoy it.  A summary of the book follows:

Hawkins argues that one of the biggest obstacles to our quest to unlock the secrets of human intelligence is that we have huge amounts of data about the brain, but very little theory to explain it.  There are tens of thousands of researchers all over the planet that are probing the brain, measuring it, analyzing its connections, plugging electrodes into it and so forth.  We have an enormous pile of data about almost any aspect of the brain.  But where are the theories?  Who can explain what all this data means and how it is that the billions of neurons and their connections within the brain cause intelligence to arise?

Hawkins claims that we have been held back by the false theory that behavior defines intelligence, when in fact prediction is the true definition of intelligence.  Take a look at an IQ test…the questions focus almost entirely on the test taker’s ability to predict the next part of a pattern or to predict what the relationship is between various objects or scenarios.  An alligator can eat, walk, attack, and even show emotion.  But a human shows drastically more intelligence because he can make predictions about how and why the things around him currently behave or will behave in the future.  Prediction, according to Hawkins, is the hallmark of intelligence.

How does the brain predict?  The brain is continuously building a model of the world around it by taking sensory input from the eyes, ears, and other organs to record memories of our experiences.  New experiences and inputs are then compared to previous memories within this model and a prediction is made.  For example, if the brain has seen a door with a handle on the right side, then the next time we see a door the brain will predict that the handle will again be on the right side.  The success or failure of these predictions, as well as new experiences are continuously fed into the neocortex so that it continuously evolves and self modifies is model of the world.  Hence the saying that practice makes perfect.  Language works the same way.  We can typically predict the last word of a sentence without a person even having to say….it.

Many claim that the brain’s structure is too complex to unravel and that this is what has held us back from understanding it.  Hawkins shows that this is untrue.  The folded and wrinkly part at the top of the brain ,called the neocortex, is responsible for most of our intelligence and actually consists of an ordered, very regular, repeating pattern of layers.  There seems to be a simple structural pattern that the brain uses over and over again to carryout its function.

Another interesting part of Hawkins’ book explains how the brain is able to see objects such as a face under different lighting conditions, at different angles, or with slightly different features and still be able to recognize the face.  This ability is easy for humans, but very difficult for computers.  The secret to this human ability is called invariance.  When our brain looks at a face, different portions of the neocortex are responsible for identifying different features.  One portion is only responsible for identifying whether or not an object is a face.  Another portion is only responsible for identifying key facial features such as the eyes, the nose, or the mouth.  By breaking the problem down into smaller parts rather than focusing on the entire face as a whole, the brain is able to identify the face irregardless of small deviations caused by lighting, angle, and so on.  This hierarchal approach to processing information is one of the secrets of the brain that Hawkins is now trying to put into real world, commercial use with his company Numenta, as outlined later in this post.

The Redwood Center for Theoretical Neuroscience

The Redwood Center for Theoretical Neuroscience is the end result of Hawkins’ multi-year effort to create a world class organization for theoretical brain research.  There are hundreds of institutions that focus on analyzing the brain by probing it, dissecting it, modeling it, and so forth, but very few organizations that focus on developing a grand theory behind how the whole thing works.  The Redwood Center for Theoretical Neuroscience is one of the foremost institutions now set upon attacking this problem.

Originally Hawkins launched the Redwood Neuroscience Institute (RNI) in Menlo Park, CA in August 2002 to enact his vision of a world class research institute.  The RNI eventually moved to Berkeley in 2005, and was relaunched as the Redwood Center for Theoretical Neuroscience with increased funding, activities, and academic backing.  A description from their website:

“Our goal is to develop mathematical and computational models of the underlying neurobiological mechanisms involved in perception, cognition, learning, and motor function. We collaborate with experimental neuroscience labs in the design of experiments and in the analysis of neural data. We also train students at UC Berkeley in these ideas and methods.”

Numenta is the company founded by Hawkins in 2005 to commercialize and spread the breakthroughs of his many years of theoretical brain research.  Numenta has developed a new type of computer memory system modeled after the new understanding of the human neocortex that has been developed and promoted by Hawkins in his book and at RNI.  By leveraging the hierarchal, invariant, feedback based techniques used by the human brain Numenta has created a new type of memory system called Hierarchical Temporal Memory (HTM) that is breaking new ground in enabling computer systems think intelligently.

Perhaps most fascinating about Numenta is its mission to spread its technology to as many interested company’s and participants as possible, no matter if it provides financial benefit to Numenta or not.  A software package containing Numenta’s technology is freely available to anyone interested.  This is really an amazing asset that Numenta has provided to the world community.  Running Numenta as a profit making company for profit’s sake is not Numenta’s primary mission, but rather the real mission is to evangelize the worldwide community as rapidly as possible towards a technology that might finally be leading us to the  long dreamed but as yet unrealized goal of replicating human level intelligence.  Below is a letter from Hawkins about the philosophy behind Numenta’s creation:

“I have been working on a theory of the neocortex and the resulting Hierarchical Temporal Memory (HTM) framework for over twenty years. From the beginning, I knew that one day we would be able to build machines that work on principles used by the brain, and that doing so would benefit people all around the world. We decided to create Numenta when it became clear – in large part due to the work of Dileep George – that we could finally build technology based on the principles of HTM.

Our main objective is to maximize the impact of the HTM technology. The potential applications for this technology are far greater than any one company can explore, and therefore the only way to realize the potential is to create a developer community surrounding it. As I have a lot of experience in creating developer communities through my work at Grid, Palm and Handspring, I was energized about this idea.

We considered a not-for-profit structure. We considered an open-source structure. Ultimately, however, we decided that the way to get the most people working on HTM was within a for-profit framework. People move quickly in a for-profit environment – they are willing to invest more, and sooner, if they believe they have a financial return down the road.

We are focused on making developers successful by providing source code, documentation, and support. Developers own their own intellectual property rather than being required to contribute it back. A fundamental principle of the Numenta business structure is to be a catalyst that enables others to create profitable businesses.

Numenta is also a for-profit business. This is critical for us in order to attract high caliber employees and to fund the business over the long term. We will generate revenue by selling support, licensing software, and licensing intellectual property. The exact revenue mix will change over time, but we always will seek to make our developer partners successful, as well as be successful ourselves.”