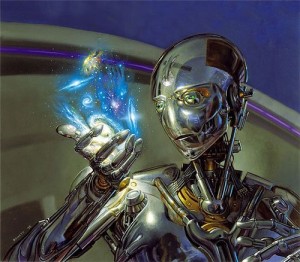 David Gelles from The Futurist has written a very detailed piece that describes Silicon Valley as the epicenter of a worldwide transhumanist movement.  Gelles’ article is neither pro nor anti transhumanist, but instead is focused on telling us about the history and the players that have shaped this movement from past to present.  The article is a crash course for anyone interested in learning what the transhumanist movement is and who is involved.

At a whopping 20 pages, you really have to be interested in transhumanism to sludge through this article.  For those who don’t want to read the whole thing, here is my take on a short summary:

With an ample supply of wealthy people equipped with strong technical backgrounds and an open mind to new ideas, the transhumanist movement has naturally found its home in Silicon Valley.  Recent advances in technology have taken transhumanist ideas such as radical life extension, immortality, brain uploading and copying, and biological or machine based body enhancement from the realm of crazy to the realm of possible.

Large numbers of smart, successful silicon valley players are joining a transhumanist movement that holds both great promise and great peril for mankind.  Some see transhumanists as forward thinkers at the forefront of change, while others see them as borderline religious fanatics attached to ideas that are dangerous and/or ridiculous.

Major players in the movement are mentioned, including:

Robert Ettinger – “The Father of Cryonics”, founder of the Cryonics Institute, Author of famous Immortality Books

Ralph Merkle – pioneer in cryptography, researcher and speaker on nanotechnology and cryonics