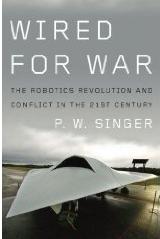 P.W. Singer just launched his latest book titled Wired For War: The Robotics Revolution and Conflict in the 21st Century. This looks to be a must read book for those that are interested in all aspects of robotics, whether it be cutting edge innovations in the pipeline, political ramifications, ethical battles, and more.  The official website for the book offers an array of resources, including a well stocked archive of youtube robotics vidoes.

Just yesterday, P.W. Singer was interviewed on NPR and it is well worth a listen

Here is a summary of the book from the official website:

What happens when science fiction becomes battlefield reality?
An amazing revolution is taking place on the battlefield, starting to change not just how wars are fought, but also the politics, economics, laws, and ethics that surround war itself. This upheaval is already afoot — remote-controlled drones take out terrorists in Afghanistan, while the number of unmanned systems on the ground in Iraq has gone from zero to 12,000 over the last five years.  But it is only the start. Military officers quietly acknowledge that new prototypes will soon make human fighter pilots obsolete, while the Pentagon researches tiny robots the size of flies to carry out reconnaissance work now handled by elite Special Forces troops.

Wired for War takes the reader on a journey to meet all the various players in this strange new world of war: odd-ball roboticists working in latter-day “skunk works” in the midst of suburbia; military pilots flying combat mission from their office cubicles outside Las Vegas; the Iraqi insurgents who are their targets; journalists trying to figure out just how to cover robots at war; and human rights activists wrestling with what is right and wrong in a world where our wars are increasingly being handed over to machines.

Props to our reader, Bruce Colthart, who suggested this story