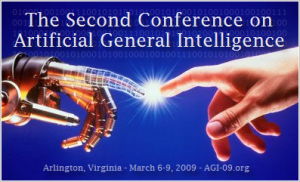 The second conference on Artificial General Intelligence (AGI) is set to convene in Arlington, Virginia on March 6-9, 2009.  The conference stands uniquely as one of the few (only?) conferences that focuses solely on the ambitious goal of creating true human level artificial intelligence.

The conference, dubbed AGI-09, comes on the heels of last year’s successful conference in 2008, AGI-08.  The schedule for the conference is intense, offering attendees a three day lineup of keynote speeches, workshops, moderated discussions, and presentations.

Singularity Hub has negotiated a 10% discount on admission to the conference to the first five readers that signup. The discount only applies to regular price admission (it cannot be added on top of an AAAI discount or student discount).  To take advantage of this discount, simply be one of the first 5 people to mention Singularity Hub when you register.

The Hub’s Keith Kleiner recently had a chance to speak with AGI-09 creator and conference chair Ben Goertzel to ask him about the conference and the field of AI in general.  Below is a short bio on Goertzel, followed by a summary of Kleiner’s discussion with Goertzel:

Goertzel is the founder and CEO of Novamente, a company that supplies software products and services to power intelligent virtual agents for virtual worlds, computer games, and simulations.   Goertzel has been showing up everywhere, presenting at the Singularity Summit in 2007 and 2008 and also presenting this tech talk at Google.  Goertzel is the driving force behind opencog.org, a collaborative website for the open source development of human level artificial intelligence, reported on earlier at Singularity Hub.

Goertzel pointed out that narrow AI is becoming significantly more advanced and is showing up everywhere in our lives.  A few examples: credit card fraud detection, chess-playing, scientific data analysis, scheduling military operations, and controlling non-player characters in games.  With the relentless advance of Moore’s law and accelerating technology, interest and confidence in our ability to create human level artificial intelligence is slowly on the rise.  Goertzel is hopeful that someone in the next few years (perhaps even one of his efforts) will achieve a major success that will alter the landscape and cause others to join the cause in greater numbers.

When asked what he would really like to see from the AI community in the near term, Goertzel stated he would like to see us develop and converge on a detailed roadmap for the creation of human level artificial intelligence.  Such a roadmap could follow in the footsteps of the Metaverse Roadmap, a successful initiative that the virtual world community is using for the creation of advanced, immersive online 3D worlds within the next ten years.  Sounds like a good idea to me!  If Goertzel or someone reading this blog post doesn’t beat us to it, perhaps Singularity Hub will lead the beginning of such a roadmap.