What is your mother’s maiden name? What was your high school mascot? What town were you born in? Who cares! Pretty soon, your body could be the only password you’ll ever need.

As the field of biometrics takes off, the securities that protect your identity – from your credit cards to your property – will increasingly focus on your own flesh and blood. And it’s not all fingerprint scanners and voice recognition. New technologies are allowing your identity to be confirmed (or revealed) from a greater distance, more quickly, and without necessarily asking your permission.

Take your ear. No, that’s not a van Gogh joke; it’s called otoacoustic emission (OAE), and it’s the center of one of the many fascinating frontiers in biometric technology. Every time an auditory stimulus strikes your ear, hair cells along the spiral-shaped cochlea (part of the inner ear) translate the vibrations into action potentials, which are relayed on to the temporal lobe in the brain. With the right stimulus – a series of clicks, for example – these hair cells make some noise of their own as they expand and contract: otoacoustic emission.

Everyone’s inner ear has a unique structure, sort of like your fingerprint. Subtle differences in the cochlea translate into subtle differences in the OAE it produces. Dr. Stephen Beeby, an engineer at the University of Southampton, UK, is leading a research project to capture these unique sounds and use them as part of biometrics. By stimulating the ear with clicks, he hopes to capture the unique OAE of a person’s ear and use it as an identification tool.

If supersensitive microphones capable of sensing an OAE were built into your cell phone, your identity could be confirmed from afar. This way, your bank or cell phone company could know for sure that you were you, and not that guy who found your credit card on the sidewalk. If the technology is perfected and fully implemented, your cochlear-ID could secure every phone purchase you make. It could also shut down your cell phone or mp3-player the moment they touch foreign ears. Just in case that German guy who stole my iPod is reading: your days are numbered, mein freund.

Introducing new biometric techniques is no easy task. The researchers will have to show that OAE signals do not change over time, thereby providing a consistent biometric ever an individual’s lifetime. They will also need to prove that their technology has a low rate of false-match mistakes before its widespread use. There are still some bugs to work out. Excessive wax or ear infections can also muddle the signal, and apparently alcohol also dampens the sound of the OAE. That could make that late-night pizza delivery harder than you thought. 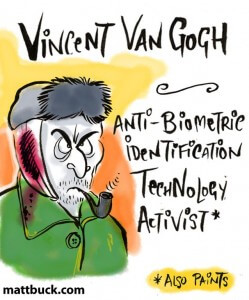 Audiologists have even suggested that they can distinguish gender, and even ethnic groups, by looking at OAE signals. This broadens the scope of how this technology could eventually be used; it also raises the whole host of ethical questions that surround biometric technology. How many aspect of our identity do we want to reveal with the sound of a click? I suppose you could always thwart your would-be identifier with speaker phone.

The research is funded through mid-2010, so we should be seeing their final product – bugs worked out – by then. Researchers hope to sell their microphones and software to electronics companies, and you shouldn’t be surprised to see this technology hitting the market soon after. So if you’re always forgetting your passwords, you might be able to – ahem – lend an ear instead. Just don’t go all Dutch Post-Impressionist on us.

–
Side note: I am fully aware – though reasonably skeptical – of recent claims regarding a certain painter’s ear, or lack thereof.