This is a guest post written by entrepreneur and visionary David Orban.  He is an Advisor and the European Lead of the Singularity University. He is a Founder and Chief Evangelist of WideTag, Inc., a high technology start-up company providing the infrastructure for an open Internet of Things. David cuts across the limits of deep specialization to contribute to the new renaissance. He explains,“My vision is at the crossroads of technology and society as defined by their co-evolution.” His personal motto is,“What is the question I should be asking?” This concept is his vehicle to accelerating cycles of invention and innovation in order to build the new world ahead.

The Singularity Summit 2009 was a resounding success in New York this past weekend, Oct 3-4 2009.  For those who are not familiar with the Singularity Summit, it is the most prominent, high profile annual event focused on the Singularity.  Over 800 attendees crowded the prestigious venue of the 92 Street Y, an important landmark in the cultural scene of the city. 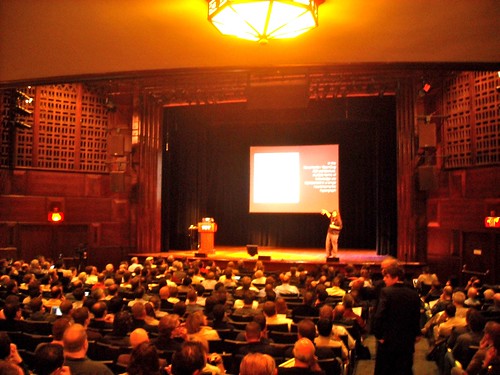 During the two days of the conference there were over 30 speeches and panels, luckily in a single sequence without the burden and compromise that parallel sessions so too often put on the attendees. From the creation of an Artificial General Intelligence, the Whole Brain Emulation approach, Synthetic Neurobiology, Intelligent Agent, there were many somewhat technical sessions, interspersed with others that were more generally concerned with cognition, and its biases, quantum computing, or lighter but not less important subjects such as autonomous vehicles, the petaflop macroscope, and others. Surely there will be detailed reports of many if not all of these. All the talks were recorded by both SIAI and 92Y, and the videos should be online soon.

In a moment of financial and economic crisis, where many people are concentrated on their short term problems, it is not easy to popularize an idea that even according to the most optimistic projections can take decades to develop. But this is exactly what is needed, if the organizers want to broaden the appeal of the conference, and of the non-profit behind it, the Singularity Institute For Artificial Intelligence (SIAI). In order to gather more resources and donations, there is little other choice but to make sure that the message and the goals of SIAI are known and accepted by the widest possible audience. In this sense Michael Vassar President of SIAI, won his bet in deciding to bring the Summit to the East coast for the first time this year, instead of at its traditional home in Silicon Valley on the West coast.

It is hard to estimate their respective proportions—let’s say 50-50 for the sake of simplicity—but the participants could be rather easily divided between those who approached for the first time the concepts, the series, and the potential applications behind the singularity, and those who have been following the field for some time, or have already participated in past editions of the conference. It is important in my opinion to judge the success of the conference with two different sets of criteria for these two groups.

It is unlikely that somebody completely ignorant about the issues of the Technological Singularity would decide to attend, but even so it is likely that at least one introductory speech and maybe a Singularity Primer document, either in a printed form or at least as a nicely formatted downloadable pdf file, would have been useful. It is clear that in a rapidly evolving field it is not possible to compose and edit a definitive or, and complete introductory treatise. However, it should be part of the mandate of SIAI, as it reaches out to wider circles of non-specialists, to take on the responsibility of the creation of such a document, with the additional task of updating it every couple of years.

A last-minute and welcome addition to the program was a conversation between science-fiction author, and now chairman of Genescient, a company founded on the use of artificial biological selection, Gregory Benford, and the developer of symbolic computation system Mathematica, author of A New Kind Of Science, and creator of Wolfram|Alpha the computational knowledge engine, Stephen Wolfram

One cannot enter in the merit of the content of the talks without the description becoming specialized. It definitely appeared, also from the informal polls that some of the speakers asked from the audience, that’s the concepts of Artificial General Intelligence, an Intelligence Explosion, and of the Technological Singularity, are becoming more and more widely accepted. Frustratingly for a scientific approach the bounds for any of these achievements or events do not necessarily appear to converge, except for the leading figure of the field, Ray Kurzweil, who consistently persists in his precise projections of fundamental milestones in the future.

An almost universal need appeared to find a better and stronger connection between the ideas, theories and models exposed at the conference, and their full implementation, too often cut short for lack of funding, either in academia or in the industry, concentrated on short-term results. In this sense it was interesting to hear investor Peter Thiel express his desire to support long-term the goals SIAI, made concrete through its sponsorship by Clarium Capital which Thiel manages, and participate in the venture capital panel, where the consensus appeared to still be that of a model where 5-year exits were the norm.

From a logistical point of view the organization of the event was practically flawless! The registration, the speeches, the Q&A, the breaks, flowed without any noticeable problem. A large group of volunteers took care many details, sometimes overlooked, as the quick and seamless changing of the computers between one speech and the other, or something as simple as holding the door of the conference room for people entering or exiting during the speech to make sure that it would not noisily slam… Such an attention to detail is a real sign of a high quality event.

Eliezer Yudkowsky very eloquently illustrated the unacceptable downsides of not properly dealing with the issues of the Singularity and of Artificial General Intelligence in his talk on cognitive biases, and giant risks. And towards the end of the conference, one of the emotional highlights was certainly the joint call from the panel composed of Yudkowsky, Thiel, longevity researcher Aubrey de Grey, and moderated by Michael Vassar, to invest from each of the attendees as they are doing, passion and resources to face up to the great challenges in front of us all in the future.