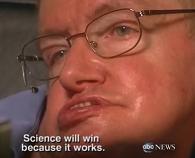 The renowned physicist Stephen Hawking has tackled describing black holes and the history of the universe. Now it seems he wants to explain the very nature of existence. In his latest book, The Grand Design written with Caltech’s Leonard Mlodinow, Hawking sets out to answer three very fundamental questions: Why is there something instead of nothing? Why do we exist? Why does this particular set of laws govern our universe and not some other set? Most would consider the answers to these questions to be under the purview of theologians and philosophers. Yet, rather than relying on metaphysical or religious answers, Hawking and Mlodinow seek to find a firm and scientific explanation for why we are here. Hawking’s ‘God-not-required’ approach to the question of our existence has sparked controversy and debate, watch his recent interview with Diane Sawyer in the video below to catch some of his juicier comments on the subject.

“Because there is a law such as gravity, the universe can and will create itself from nothing. Spontaneous creation is the reason there is something rather than nothing, why the universe exists, why we exist….It is not necessary to invoke God to light the blue touch paper and set the universe going.” – The Grand Design (Hawking and Mlodinow 2010)

It’s no exaggeration to say that Stephen Hawking is one of the most, if not the most, prominent name in physics in our time. His attempt to explain what many consider to be the mysteries of life, and his pinning those answers on ‘spontaneous creation’ not God, is a notable step in the ongoing debate between faith and reason. Essentially he is saying that there is little, or nothing, that science cannot attempt to explain.

Even if those scientific explanations turn out to be much more fantastical than the religious ones. The Grand Design proposes that “every possible history of the universe exists simultaneously.” Humans are alive, in essence, because we live in a universe, out of one of the infinite number of universes, where the laws of physics allowed life to evolve on Earth. We are a natural occurrence of our universe’s starting conditions and laws, and the fact that we exist in this universe is simply due to chance. Or, to view it in another way, our existence only seems destined/designed because if the universe didn’t happen to randomly support our existence we wouldn’t be here to discuss it.

With Isaac Newton physics attempted to explain forces we could see and feel. Later scientists explained increasingly ephemeral phenomenon from electricity to heat. In the last one hundred or so years we’ve had to tackle concepts like relativity and quantum mechanics, which take astronomical observations or elaborate super colliders to probe properly. Modern physicists, with string theory, M-theory, and multiple universes, are trying to explain things that may be literally impossible to test. In this grand journey towards the intangible are scientists having to ask readers to take more on faith, to be more ‘religious-like’ in their explanations? Even if the end results seem similar to us, Hawking sees it differently: