Freeze a life to save a life. Medical researchers at Massachusetts General Hospital in Boston are planning to temporarily replace the blood of trauma patients with an icy saline solution. The hope will be that by rapidly cooling the human body, surgeons will have time to repair the damage that is killing it. Led by Dr. Hasan Alam of Harvard Medical School, the emergency preservation resuscitation project will cool patients as low as 50°F (10°C), well below normal levels (98.6°F, 37°C) and below the temperatures that would normally induce death (71.6°F, 22°C). At low temperatures, major organs, perhaps especially the brain, may be preserved from injury as metabolic functions cease. Whereas serious trauma patients may normally have just a few minutes to have a gunshot wound or other major injury repaired, Alam hopes that cooled patients will have 60 to 190 minutes of extended time in the OR. While trials at MGH are likely to involve just a few patients in the next year or two, Alam is already discussing the possibilities of how his practice might save lives. Listen to his interview on NPR in the audio clip below. Suspended animation isn’t science fiction anymore. 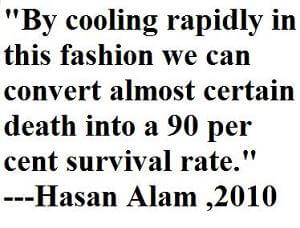 Alam isn’t the only researcher looking to cool human bodies for trauma repair. According to BBC News, Dr. John Elefteriades at Yale University New Haven Hospital has used hypothermia of a similar nature on heart patients. In fact, hypothermia for organ transplants and other surgeries has been fairly common at times – it goes in and out of style due to its high risks. Yet low temperature procedures of patient’s after major trauma – that’s pretty edgy. Alam is planning to work on patients that are often bleeding out. Instead of pumping blood back in, you remove the need for blood (oxygen really) through extreme cold. Fix the patient, then give them blood and warm them up. It’s an ingenious, and still very risky technique. While he hasn’t worked on a human in this manner, Alam has had great success with large animals. He explains more to NPR’s Guy Raz:

The technique Alam plans to use to cool patients sounds downright gory. Using a pump inserted near the heart, Alam will remove the patient’s blood while adding in ice-cold saline solution (near 10°C). As that solution circulates, the body’s cells will shut down, slowing or stopping their metabolic activity. With no action going on, there will be no need for oxygen, and the cells should be able to hold tight without blood as the body’s trauma is repaired. Yet during that operation, the patient will be effectively dead. That’s an aspect that the recent BBC Two program “Horizon: Back from the Dead” explores quite thoroughly. The full show, which discusses the work of Alam, Elefteriades, and others, isn’t available to viewers outside the UK. I can, however, show you a clip from the show which tells the story of Anna Bagenholm, a skier who’s icy near-death experience was the inspiration for many of the modern hypothermia techniques:

There’s more than one way to freeze a patient – other researchers have explored how hypothermia can help those in surgery. Besides Alam, there’s also Mark Roth who is working on techniques to place people into suspended animation so they can survive on the way to hospitals. Roth has had success using a hydrogren sulfide compound to enable the body of mammals to suspend metabolic activity. Along with cooling, which Roth has explored thoroughly with lower order animals, the hydrogen sulfide cocktail could help humans recover from near-death states with great success. Roth’s work is just part of a larger initiative at DARPA designed to help injured soldiers live long enough to make it to surgery after being wounded on the battlefield.

Medical hypothermia will eventually lead to a more general use of suspended animation. The emergency preservation resuscitation that Alam is exploring, or the hydrogen sulfide solutions from Roth, or some as yet undiscovered procedure, should allow us to place the body in a prolonged state of inactivity with little to no ill effects. The classic application for this type of suspended animation is space travel, but who knows where it will ultimately be applied. For now, freezing humans is so risky it really only makes sense if they are about to die anyway. One day, however, going into cold storage may be just another way humans extend their lives. Work like Alam’s goes to show that our understanding of death is still developing. For now, it’s kind of cool to know that being close to freezing can actually be good for you. After all, “you’re not dead until you’re warm and dead.”