In most laboratories, mixing up your samples probably means a botched experiment and a bit of frustration. But if you happen to work in reproductive technologies, an accidental swap might… well… impregnate a woman with a stranger’s baby. It’s rare, but it does happen. In a move to prevent such embryonic mix-ups, researchers have devised a new way to keep test tubes straight: barcodes.

In a recent paper in Human Reproduction, Spanish scientists describe a method of applying barcodes to mouse oocytes (egg cells) and embryos. Microscopic silicon labels are injected into the space just beneath the zona pellucida, a membrane which surrounds the oocyte. After the egg is fertilized and develops into a blastocyst, it sheds this outer membrane (a process called ‘zona hatching’) and attaches to the uterus. The barcode is also shed and left behind with the zona pellucida. The process was previously proven to be safe for the developing embryo.

Scientists at the Universitat Autònoma de Barcelona have successfully applied this technique to mice, and now have the green light from the Department of Health in Catalonia to use it with human embryos at Spanish fertility clinics. They hope the technique will not only reduce the risk of human error, but will streamline lab procedures and boost success rates. Researchers are also hoping to develop a “sticker” version which simply attaches to the outer wall rather than being injected. 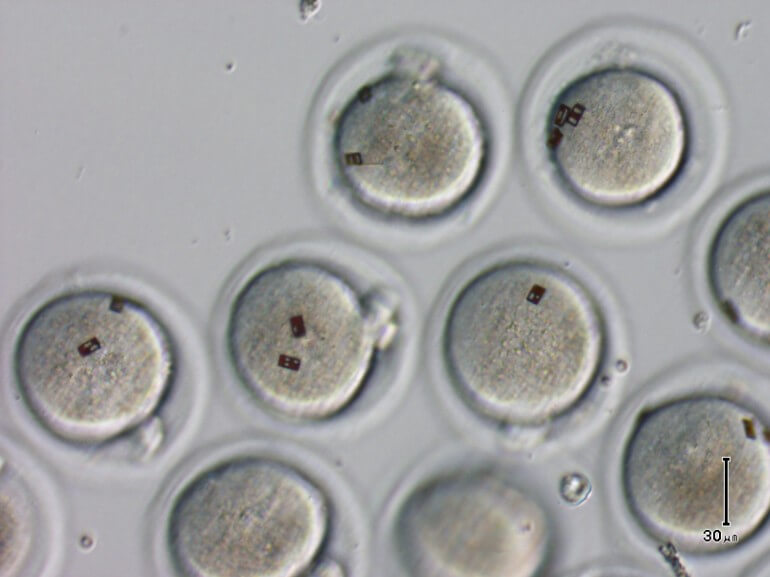 The barcodes are currently read manually, by scientists looking through a standard microscope. They are now working to develop an automated system to read the tags, which would hopefully cut out another stage of potential human error. We could add that to the growing list of robots taking over the life sciences.

It’s certainly a headline-maker, not least for the sci-fi idea behind it. Still, it’s unclear to what degree IVF clinics would take up the technology. I’m sure normal, non-reproductive laboratories wouldn’t mind having a surefire way of labeling their samples, but it isn’t terribly practical. It’s unclear that IFV clinics would be any different (as I mentioned, mix-ups are rare). It could make for some interesting PR, though: “Want to be sure it’s your baby? Trust our proven barcode technology!”

And I also wouldn’t get too Big-Brother paranoid on this one; you probably have more to worry about from your social security number.