If surfing YouTube for videos is just too grueling of a task for you, don’t worry. A developer in Idaho has recently created a prototype set of controls that let’s you search for videos with nothing but your voice and the Chrome web browser. Robert Oschler took just 3 days to create his voice search demo! It’s free for you to try out here but you’ll need Chrome 11 Beta or newer to get it to work. While this voice search engine for videos isn’t quite ready for prime time (the speech to text converter is hard to please), it is a lot of fun to explore. We’ve already seen voice commands work their way into smart phones, and I can’t wait until voice controls are a regular part of web browsing as well!

While Oschler’s speedy creation of the voice command video search is impressive, it woudn’t have been possible without Chrome’s recent speech input API. As you can see in the API’s demo here, it not only handles speech to text conversion, it also sets up the microphone icon and all the other parts of the user interface that appears in the browser window. As Oschler told Venture Beat, including Chrome’s speech input into his demo only required one line of HTML code to accomplish! (The rest of the 3 days was largely spent learnign YouTube’s REST API and writing some Javascript for the demo.) Considering how simple the Chrome speech API is to incorporate, perhaps the real story here is that we should expect many other developers to create new speech-input functions for Chrome in the weeks ahead. That should be awesome.

Of course, they probably won’t be able to write their demos as fast as Oschler. The man is a self-professed A.I. and robot nut, one of the admins at Robots Rule, and (from what I gather) a regular Singularity Hub reader. Those kind of people are just more capable. 🙂

Kudos on the voice command video search demo, Robert. And let us know what crazy project you complete at break-neck speeds next. 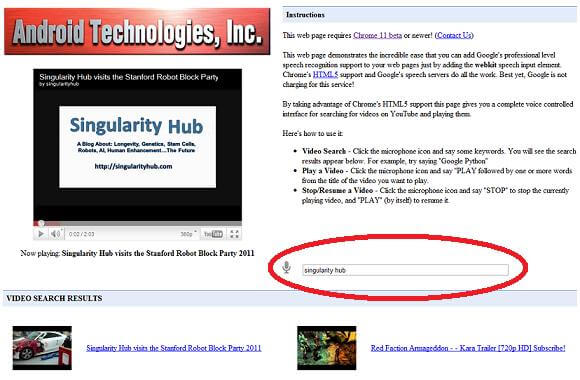