I’m here to talk memes. Internet memes. And if you think they’re just about trendy videos, cute cats, and dancing babies then think again. Memes are serious business: they shape elections, change the way we talk about our lives, and offer insight into where we’re headed as a global society. The internet never sleeps, and the culture that has arisen around its popular use is evolving every second of every day. Somewhere in that evolution we crossed a very, very weird line. The last decade has seen the arrival of lolcats, fails, trolling and dozens of other phenomena whose sophomoric exteriors bely subtle tones of social complexity and etiquette. Some pioneering scientists and historians have struggled to track and understand memes, but we’ve all got to start paying more attention to them soon. As our digital lives take on greater importance, cultural capital is becoming an increasingly relevant currency, and memes could be the investment opportunities that could make you rich and famous.

Quick question, how much do you think a picture of a cat is worth? Millions of dollars. Eric Nakagawa, Kari Unebasami, and Ben Huh has parlayed images of kitties with silly captions into an online empire. The I Can Haz Cheezburger Network has over forty linked sites that do one thing and do it extremely well: selling memes. Icanhazcheezburger.com features user generated images of the aforementioned kitties with silly captions. Failblog does the same for public mistakes. My Food Looks Funny…well, that’s pretty much self explanatory. These sites are popular. Absurdly so. The I Can Haz Cheezburger Network enjoys 375+ million page views, and 110+ million video views each month – that’s in the same league as major news outlets like the New York Times or Huffington  Post. More importantly, it features 500,000+ pieces of user generated content – images, graphs, GIFs, videos, etc that the network receives for free, and uses to attract its legion of followers. They have special online tools (such as the LOLbuilder) to help their users craft bits of folly and become contributors. 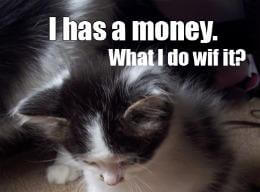 In this system, bits of intellectual detritus can generate a following, soar to epic popularity, and become cultural icons of our times. This is one of the factories where memes are made, and where they will continue to thrive. According to TechCrunch, Pet Holdings, the company behind the I Can Haz Cheezburger Network, has raised more than $30 million in funding and is actively seeking to expand its 50 employee base to help wrangle its growing popularity.

As instrumental as I Can Haz Cheezburger has been, it’s just a small piece of a much larger meme-pie. Imageboards (4Chan being a notorious example) have organically created hundreds of memes in the course of anything-goes discussions while many content-driven sites try to consciously create the next big meme, knowing that viral sharing can generate millions of page views for little effort. Marketing strategies have arisen around this new kind of ‘word of mouth’. YouTube and other video sharing sites can turn everyday people into instant celebrities. Sometimes the payout for these meme-success stories is nothing but passing glory, sometimes it’s very tangible profit. Forgive me, but I’m going to share a very annoying video with you that illustrates this concept better than any other in recent memory. It’s a little ditty you may have seen before: Rebecca Black’s “Friday“…

So yeah…that video may be lacking in all artistic merit but it has 154 million views and counting and many tens of thousands of dollars generated on ads alone. Like AutoTune The News’ hit “Bed Intruder Song“, another video that reached widespread fame and meme status, “Friday” made considerable profit from related sales on iTunes. In some cases, memes are money.

But they’re more than that, too. Let’s take a look at I Can Haz Cheezburger’s latest acquisition, Know Your Meme, which was reportedly sold for seven figures. Know Your Meme tries to do what folklorists have been attempting for centuries: understand and chart how culture unfolds. Unlike previous generations of historians, however, Know Your Meme doesn’t struggle against a lack of cultural artifacts, but the exponential growth of them. For perhaps the first time in history the means of creating and sharing cultural context is the same, and most of what we experience publicly online is being recorded automatically. Earlier this year at Web Expo 2011 in San Francisco, the Know Your Meme team expounded (in their own lovely comic fashion) upon the unique challenges and opportunities faced by modern folklorists:

Information overload doesn’t even begin to describe what we’re facing when you try to track memes. We have no way to predict which random picture or video will become mega-famous. There’s no accurate threshold below which we can ignore a trend, either. Ideas can lay nearly dormant for years before exploding into meme-tastic glory, as the Know Your Meme panel demonstrated with the Keyboard Cat phenomenon. The glut of data we experience now is only going to increase as billions more people around the world are set to come online in the next few decades and begin to view, share, and generate their own cultural trends. We haven’t even come close to peak-internet-meme production yet.

More and more, I think we need to view memes as an intangible but very valuable resource. They can translate into financial gains, grant us historical perspective, or even help us wield political power. Jure Leskovec, Lars Backstrom, and Jon Kleinberg, computer scientists at Stanford and Cornell, created MemeTracker.org – an attempt to chart the lives of memes in a way fit for data analysis. Sifting through a million online sources each day, MemeTracker gives us a quantitative look at the strength of keywords and phrases that are the backbone of non-graphic memes, specifically those revolving around news and politics.

What good is this data? It grants politicians the same advantages as recordings of sports games give to coaches, or forensic evidences gives to detectives. With well tracked political and news memes we can see which ideas rose to dominate the public consciousness. Did your spin on events get discussed more than your opponent’s? Do scandals around bastard children get more press than those around shady campaign contributions? When did the tone of an election shift from domestic to foreign concerns? Understanding these factors will let us shape propaganda like no one has ever done before. Not with the heavy iron fist of an authoritarian tyrant, but with the subtle and deadly grace of a master spy. There’s real power there, waiting to be used.

The public face of internet memes is the silly one – the cat photos with ridiculously spelled captions and the weird videos that somehow gain popularity against all good taste. Unsurprisingly, the upcoming generation has done the same thing that all previous generations have done: put their own stamp on the world; and on the surface, internet memes are just the latest forms of slang. Yet the current zeitgeist is built on a new media that will fuel real and important change. Just as the radio generation crafted global wars, and the TV generation cemented the bond between appearance and power, the internet generation is already starting to change the way we deal with truth. Take a look at the 24 hour news networks, partisanship in the US and the world at large, and the rise of smaller more specialized news feeds (Singularity Hub included). Everyone gets their own opportunity to express themselves, their own point of view, and these versions of the truth are spammed out into the world with little to no vetting. Which perspective should we believe? I don’t know. Which perspective DO we believe? The answer is in memes. When a phrase or term or idea gets repeated often enough, even if no one really claims it’s the complete truth, it still becomes powerful enough to shape the way we think and act. Memes are not the truth, but they are how we discuss and express the truth, and now that the internet allows us to track them we can control the perception of truth like never before.

The more people who venture online, the more memes we create, and the stronger the most popular memes will become. So, whether you seek to translate them into fame, money, knowledge, or power, internet memes represent a growing opportunity. Their impact extends into our offline activity, and indeed are informed by it, but the distinction between our digital and physical selves is diminishing anyway. That means that very soon, perhaps it has already happened, managing memes through the internet will be just as important as managing real world goods and services. Cultural savvy has always been valuable, but now you can see it being made. That’s a game changing step in its evolution, and one that is likely to shape the future in ways we can’t predict.

Who knows, maybe memes will become a language unto themselves, as comedic sketch group Those Aren’t Muskets proposes in the following video. Enjoy teh lulz as they mock the worst parts of our internet culture, and please consider this my apology for making you watch “Friday”.