Looks like someone’s engineering senior design project is going better than mine did.  That’s the vibe I’m getting anyway – some biomedical engineering students designed something for a class, realized it was actually a good product,  and then got some funding to start a company with the goal of mass producing their design.  The result is the Somnus Sleep Shirt from Nyx Devices, a “revolutionary way of looking at sleep diagnostics.”  This article published recently in the MIT Technology Review gives an overview of their design. In a nutshell, just pop it on and hit the sack.  A sensor embedded in the shirt keeps track of changes in your respiration as you snooze, and that information can help you figure out just how much sleep you are actually getting.

The shirt sounds pretty cool in theory, but does it really work – can it really give an accurate picture of sleep?  The article mentions that “Analyzing sleep stages based on respiration is still considered experimental.”  It does seem that these kids are on to something though.  It is known that respiration changes during sleep in several ways.  For one thing, most of us tend to “breathe into our chest” when awake.  That is, when we take a breath our chest expands and shoulders raise to accommodate the air.  When asleep we revert to abdominal breathing, where our abdominal (belly) area expands to make room for the expanding lungs.  Further, when humans sleep, the pharynx partially collapses causing changes in the timing of breaths as well as the amount of force required to inhale and exhale.  Besides these general changes, more specific changes in respiration occur during different stages of sleep.

There are several ways one could monitor respiration: monitor CO2 levels in exhaled air, record the velocity of air as it enters and exits the nose or mouth… I’m just spit balling here.  The founders of Nyx devices thought of an easier way – monitor the changing volume of the lungs by quantifying changes in the size of the chest /abdominal cavity.  Little information about the technology behind the device is available at the moment, but it looks like stretch sensors are attached to a skin tight t-shirt using iron on patches.  As you breathe, the shirt stretches as your lungs expand with air, and the stretch sensors (capacitors) emit an electrical signal that 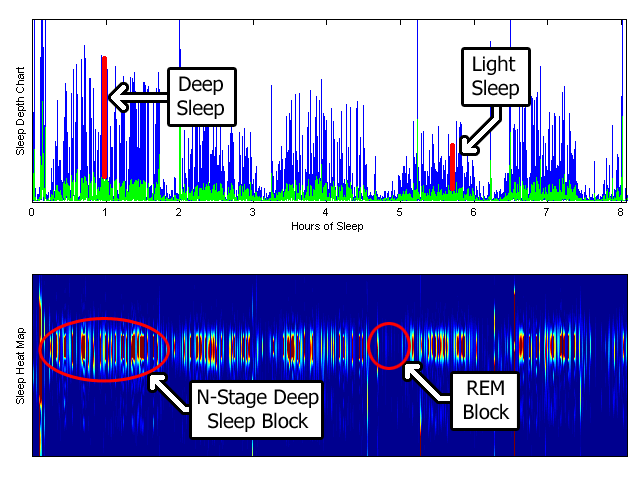 varies according to the amount of stretch.  The output contains information on the depth and frequency of breathing, which is recorded on a small chip that is also attached to the shirt.  In the morning, upload the data to your computer and the company’s software outputs a “Sleep Depth Chart” and a “Sleep Heat Map” from which you can tell how long you were asleep, and roughly in which stage of sleep you were in.

Pretty cool, but I have some doubts as to the accuracy of the device.  We have all woken up in the middle of the night breathing heavily with a bit of sweat on our brow – how would that read?  According to the American Academy of Sleep Medicine, “nightmares tend to occur during rapid-eye-movement (REM) sleep.”  But if I was huffing and puffing in my dream as I ran away from a three-headed monster, my breath pattern would most certainly not match the deep, regular breathing pattern that is characteristic of REM sleep.  Another thing, what if your sheets are particularly static-y one evening and your shirt twists around as you change positions?  In that case the sensors would just be recording how twisted the shirt is.  Similarly, what if you desire to measure your sleep cycles but you have a sizable beer gut?  By the time you wrestle an Under Armor shirt down over your belly the sensors would already be stretched, would any information even be distinguishable from the baseline signal?

These concerns may not matter though, if your main goal is simply to measure higher level sleep attributes.  A co-inventor of the shirt, Dr. Matt Bianchi, says that the shirt will be very useful when evaluating the sleep patterns of insomniacs.  The MIT article notes that “Bianchi’s previous research has shown that people with insomnia often underestimate how much they sleep, so he wants to determine whether giving them an objective way to measure sleep will help them reassess their condition and improve quality of sleep.”  So even if the device isn’t yet accurate enough to give reliable information on stages of sleep, simply knowing how much time spent sleeping (in any stage) might be useful.

Okay okay, so my concerns might be overly nit-picky.  I do, though, have one final question: who wants to sleep in Under Armor anyway?  That stuff is tight.  If I had to go to bed in clothes that tight I wouldn’t even be able to sleep so there wouldn’t be anything interesting to record.  Regardless, this is a pretty cool concept and, if it makes it to production, will add to the growing battery of products that are available to monitor sleep at home.