10,000 Year Clock Begins Construction Thanks to $42 Million from Amazon’s CEO

The construction of a modern wonder of the world is now underway in western Texas as the plans for a clock that will tick for 10,000 years have been green lit by the hefty contribution from Amazon CEO Jeff Bezos. First proposed by Danny Hillis, pioneer of massively parallel computing, in an essay 15 years ago, the clock is a beast that would make any engineer giddy at the multitude of challenges it poses. When built, it’ll stand 200-feet tall and will have a spiral staircase carved from limestone that will wrap around the massive gear mechanism and lead to the 8-foot wide clock face. A recent Wired article gave an in-depth look at the project, the nonprofit foundation that was created to support the project called The Long Now Foundation and all the project’s players while attempting to answer the question, Why the hell would anyone want to build this? The answer: Look to the future.

When Danny Hillis first shared the idea of a clock that would run 10,000 years, his friends either got it or they didn’t, though most assumed he wasn’t serious. A barrage of how questions naturally follow such an idea. How will it be built? How will it run accurately? How will it be powered? How will people see it? Danny had to research various science and engineering fields in order to create a design proposal (the clock’s design is detailed in a free 325-page pdf). But the true test of the clock’s feasibility had to be tested in a prototype, which was completed in 1999 and now is housed on loan in the Science Museum in London. The project waited for a patron until Jeff Bezos offered funds and a location to build it, right next to a private spaceport for a venture called Blue Origin, also backed by Bezos.

Like many mechanically driven timepieces, the 10,000 year clock consists of internal gear mechanisms and a clock face. It will have an 8-foot wide, 700-pound stainless steel gear wheel, and a 6-foot, 300-pound steel pendulum will cause the clock to tick every 10 seconds and direct energy from the stone weights into the titanium escapement located in a quartz box to protect it from dust. It will also use solar power to help wind the clock as well as synchronize it to solar noon.

The chime system is generated by 20 Geneva drives with varying numbers of teeth. These drives convert the constant rotary motion of the drive wheel into stepwise rotary motion of a second wheel, providing intermittent turns. The bearing for these wheels are made of a special ceramic that doesn’t require lubrication. Together, these drives allow for the almost 3.65 million possible chimes needed to have a unique chime for each day within a 10 millennium span. The chimes are actually being written by musician Brian Eno, who has dubbed it “The Clock of the Long Now.”

Finally, the clock face shows the sun and moon positions, a star field of the night sky, and a century ring and year ring to display the year in the “02011” format. Additionally, horizon lines and a rete show what portion of the star field is actually visible at the moment. But the main clock face is not intended to show the actual time (there is a separate face to do that). Instead, visitors have to wind the clock face to show the present time. The point of this is to show how long it has been since the last person visited. 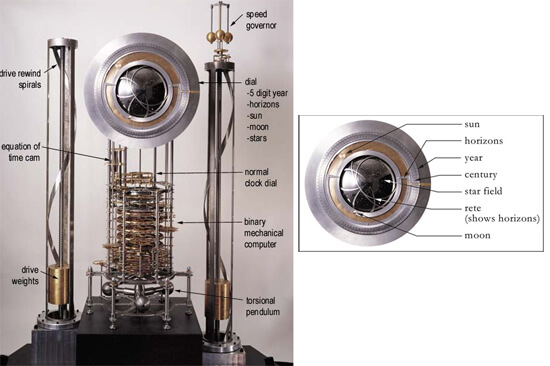 There’s no denying that massive engineering projects tantalize the mind with their scope. We recently profiled the behemoth digging machine Bagger 288, China’s 26.4-mile Qingdao Trans-Oceanic Bridge , and even the Braun twin’s model of the Hamburg airport simply because they’re too cool not to. But based on the design of the clock face, it should be clear that this clock isn’t intended to be just the World’s Largest Timepiece. Furthermore, if the project was about creating the most accurate time piece, they’d just build an atomic clock and bury it deep in the earth. But Danny Hillis has a different intention: to expand the minds of those who visit the clock. How important is this? He was even quoted as saying that the clock was more important than curing cancer because it will make more of a difference to people.

To understand what he may mean, consider a true wonder of the world, the pyramids in Egypt. They are a symbol of the forward-thinking perspective of the Egyptians. They aren’t still around today because they happened to go undisturbed for years or because they were respected universally by anyone who saw them. They’re around because they were intended to be around forever as an eternal home for the deceased pharaohs. They thought of the kind of life they wanted the pharaohs to have forever. Another example of long-term thinking is part of the inspiration of the 10,000 year clock. The 14th-century builders of New College in Oxford also planted oak trees so that when the roof beams of the hall needed replacing in 500 years, the oak trees would be available. The idea of designing something and ensuring that it would be sustainable far in the future serves as a great inspiration.

In a similar way, the goal of the clock’s designers is to make something that helps orient everyone forward in time, something which is increasingly difficult in a short attention-span culture. There are few things that can help people see beyond the next vacation, next holiday or next Super Bowl. But the clock serves to inspire thinking on a much larger time frame. Questions should naturally arise, such as what will the world look like in 1,000 years? 10,000 years? What countries will even be around? What will cities be like and how will people live? When these types of questions begin to be asked, suddenly the actions of the person asking them becomes profoundly more important. In the midst of politics and debate about the environment, transportation, climate change, urban planning, taxes, and so on, it is easy to become complacent and end up focusing instead on the question, “How will all of this affect me?” This clock is aimed to turn our attention outward and ask, “How will all of this affect the people of the future?”

The lingering question for this project is, “Is it really worth $42 million or likely more to get people to change their perspective from the here and now to the future?” Only time will tell, that is, the moment when the clock is built and each person who visits it can answer the question for themselves.

If you are interested in hearing more about the project, you can also check out this SETI talk about the clock given by Alexander Rose, the Executive Director at The Long Now Foundation: