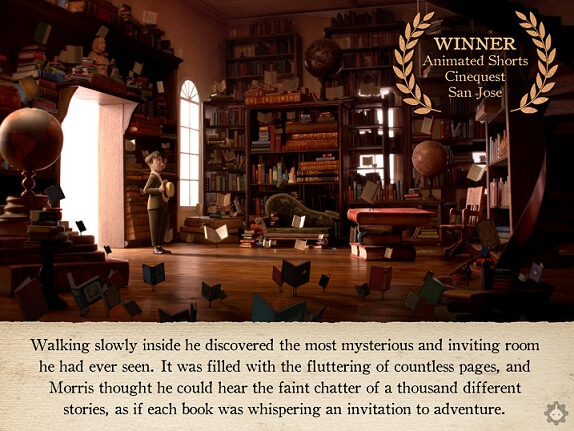 What do you do after conquering Pixar, Disney, and Dreamworks? You revolutionize tablet reading, of course. Designer William Joyce created a name for himself at the top animation studios with his one of a kind creative story telling, and he’s now taking that skill and making the next generation of interactive experiences on the iPad. He and his colleagues at Moonbot Studios created the short film “The Fantastic Flying Books of Mr. Morris Lessmore“, an amazing story inspired by Hurricane Katrina, The Wizard of Oz, and Buster Keaton movies. Unsatisfied with a simple film, however, Joyce and Moonbot transformed “…Morris Lessmore” into a critically acclaimed iPad book that embodies all the marvelous advantages afforded in e-reading. Watch the trailer for the interactive app below. With embedded voice-overs, music, games, lessons, and playful widgets to explore, “…Morris Lessmore” blurs the lines between film, video games, and traditional reading, creating a shared story-telling experience that may represent where ebooks are headed.

As you can see in the trailer for the iPad app version of “…Morris Lessmore” every page of the ebook is full of opportunities for the reader(s) to participate in the story. Yet no interaction has to be used. Parents and children can choose which options (voice-overs, games, etc) to turn on and off, allowing each to customize the experience as they see fit.

*Update 7.15.11 – Life has its little ironies – Vimeo videos, the ones originally included in this post, are unable to be seen on iPads. Here is the video above in YouTube format, sorry that the others aren’t similarly available.


Just to give you an idea of how the iPad app is actually an enhanced (and in my opinion better) version of the short film, here’s the trailer for the movie:

I think it’s very telling that the ebook version of “…Morris Lessmore” sells for $5, while the movie is just $2. The short film, while excellent, is the old kind of story-telling. It speaks, you watch. With the app, children (and their parents) are afforded a new power. They can participate in the creation of the story, shaping the experience to match their own interests. Maybe your child wants to spin the house in the tornado scene, maybe she just wants to tinker with Humpty-Dumpty’s piano for a while. Maybe she prefers your voice for Mr. Morris Lessmore. However your family wants to enjoy the tale, they can. That level of interaction is one of the key advantages that ebooks and apps have over traditional printed books and even movies. It’s worth the extra three bucks.

As ebooks continue to evolve and increase their share of the reading market it seems likely that designers like William Joyce will be drawn to the new medium. More than just a new market for literature, ereaders are an entirely new genre for creativity. It took decades for video to supplant audio, but once it did, the world changed with it. Now, interactive may be supplanting passive entertainment and that change could be amazing as well. We’re seeing this first with video games that are as much about shared story-telling as they are about immersive visual experiences. But increasingly this trend has reached into reading as well. More schools are looking into digital textbooks for older and younger students. However, just as the “…Morris Lessmore” app is more than simply a book, digital education will evolve beyond simply showing text on a screen. In every instance, engaging the user to become part of the creative team is a central tenet of the medium. “The Fantastic Flying Books of Mr. Morris Lessmore” shows us just how better that experience can be. Interaction is coming, get ready.

For those interested in learning more about “…Morris Lessmore”, Moonbot Studios offers a great behind the scene look through a series of videos on their site. Also, their next project, an interactive music video based on the band The Polyphonic Spree from Dallas is coming soon. I’ll leave you with the trailer. Enjoy!